Published September 27th, 2021 - 06:47 GMT
Haitian migrants cross the jungle of the Darien Gap, near Acandi, Choco department, Colombia, heading to Panama, on September 26, 2021, on their way trying to reach the US.(Photo by Raul ARBOLEDA / AFP)
Highlights
Climate change is uprooting more and more people from their homes. But managed sensibly, migration can help nations adapt to global warming. 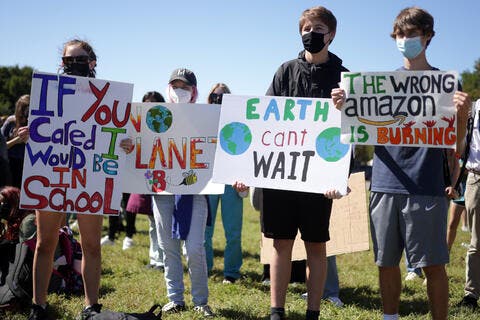 Growing numbers of people around the world, most of them poor, are being uprooted from their homes due to climate change.

But migration can be a sensible way to adapt to the effects of global warming if managed carefully and supported by sound development policies and investments, experts say.

Last year, more than 40 million people were uprooted due to conflict and disasters, the highest figure in 10 years, according to the Internal Displacement Monitoring Centre. Disasters, mostly weather-related such as storms, floods and wild fires, triggered more than three times more displacements than conflict and violence in 2020.

If no action is taken, there will be more than 143 million internal climate migrants across Sub-Saharan Africa, South Asia and Latin America by 2050, according to a 2018 World Bank report.

“The poorest people will be forced to move due to slow-onset climate change impacts, including decreasing crop productivity, shortage of water and rising sea level,” the report said.

But, the report added: “If we act now, we could reduce the number of people forced to move due to climate change by as much as 80%.”

Most climate change migrants move within their own countries.

Experts say that fears that climate change will drive vulnerable people seeking safety and sustenance across their borders are misplaced as the vast majority of climate migrants move within their own countries. Such fears are rife in parts of Europe, which struggled to accommodate large numbers of migrants and refugees in 2015-16.

And internal migration can be a sensible way to adapt to climate change, provided it is managed carefully and supported by appropriate development policies and targeted investments.

“Where the limits of local adaptation are anticipated, well-planned migration to more viable areas can be a successful strategy,” the Bank said.

Nowhere are the impacts of climate change felt more acutely than in Sub-Saharan Africa.

The 2018 World Bank report estimated that by 2050 there could be more than 85 million internal climate migrants in the region, 5% of the total projected population.

The triggers for climate migration are mainly water availability, decreased crop productivity and rising sea levels coupled with storm surges. Each of these climate migration drivers can have secondary and tertiary effects, including conflict over resources, increased poverty and famine, and long-term environmental degradation.

Many African nations depend on Lake Chad, the Nile.

One of the world’s greatest humanitarian disasters is centered on the Lake Chad Basin, which borders Niger, Chad, Nigeria and Cameroon in West Africa.

Lake Chad has shrunk by 90% since the 1960s. Around 30 million people in the region depend on the lake for their livelihoods in agriculture, fish and livestock. The resource depletion has exacerbated conflicts over resources in the region and displaced more three million people, leaving some 12.5 million people in need of humanitarian assistance, according to the United Nations Refugee Agency.

One of the most complex river basins in the world, the Nile River runs through 11 countries and supports about 40% of Africa’s population.

Longer droughts, rising populations and a siphoning off of resources via a large dam in Ethiopia may soon contribute to conflicts over water and its natural resources downstream in Egypt, potentially putting millions of people at risk of poverty and starvation.

Last year, rainfall in Ethiopia was less than expected, resulting in a decline in the production of milk, which is an important source of nutrition in the region. The UN estimates that 12.9 million people in the region risk food insecurity due to the drop in rainfall.

Cities have a critical role to play.

The Institute for Security Studies (ISS), an African think tank based in South Africa, offers a series of conclusions and recommendations.

First, it is important to recognize that the most vulnerable people seldom have the resources to migrate in response to climate change, with potentially dire consequences that require local, national and international responses.

Second, although climate change is an increasingly important driver of migration in Africa, it triggers far more movement within a country than it does internationally.

Consequently, the hardest hit countries should include climate resiliency plans in their rural and urban development planning, allowing migrants to move safely to places that can accommodate them.

Cities, according to the ISS, have a critical role to play.

Climate migrants are increasingly moving to urban centers for non-agricultural income. Those urban areas susceptible to the effects of climate change should prepare for an exodus of citizens, while those in more resilient locations should plan to receive migrants.

Over-populated and under-resourced cities can be ill-prepared to accommodate the influx of migrants, and secondary cities in areas largely spared the effects of climate change can be better options.

“Movement is a critical resilience strategy for communities and individuals faced with climate change,” the ISS said. “Migration is an important adaptation strategy that should be enabled.”

“Voluntary or planned migration is a much better option for all involved than forced displacement,” it concluded.

QUESTIONS TO CONSIDER: 1.How would you define a “climate migrant”? 2.Do you know the difference between a refugee and a migrant? 3.Has climate change affected your community? And if so, how is it responding?

Tara Heidger is a U.S. Army veteran and recent graduate of Columbia University where she received a Masters in International Affairs and a Masters in Urban Planning. Her reporting focuses on conflict and urbanization in the Global South. Heidger was a 2020 Fellow in Global Journalism at the Dalla Lana School of Public Health at the University of Toronto. 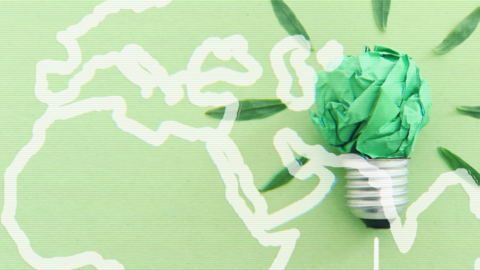 Climate Action in the Middle East and North Africa: What Can Be Done?

This article is shared as part of World News Day 2021 Campaign  #journalismmatters .