France Seeks to Play a Bigger Role in Iraq

While Paris seeks to take a leading role in Iraq, its agenda is likely to prompt further geopolitical tensions for a country already stricken with regional competition.

With the United States’ planned withdrawal from Iraq by the end of the year, France has expressed its intentions to take a leadership position in the country. Though Paris seeks to appear as a benevolent actor, its wider agenda could not only struggle to provide Iraq with much-needed security, but it could also add further geopolitical strain onto a country that has already endured regional competition. 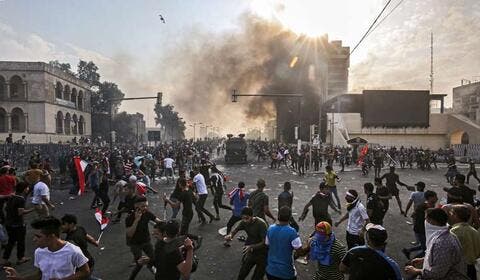 “Emmanuel Macron has steered Paris towards a more interventionist position to expand its clout in the Middle East.”

Indeed, Emmanuel Macron has steered Paris towards a more interventionist position to expand its clout in the Middle East.

After France opposed Australia’s scrapping of a submarine deal with Paris in favour of a deal between the US and UK, which triggered a war of words and souring of diplomatic ties, France may hasten its ambitions to garner an independent foreign policy.

It could also further prompt Paris to take a leading role in Iraq.

At a regional summit in Iraq on August 31, Macron vowed to maintain troops in the country “regardless of the Americans’ choices” and “for as long as the Iraqi government is asking for our support.”

"Given the geopolitical events, this conference has taken a special turn," Macron said, adding that Paris seeks to play the role of regional mediator.

France currently has around 800 soldiers stationed in Iraq. And Paris used these pretexts to provide security against a possible resurgence of the so-called Islamic State (Daesh). Despite being marginalised, Daesh has carried out deadly attacks on Iraqi cities this year, prompting a counter-terrorism campaign from Iraqi forces.

"We all know that we must not lower our guard, because Daesh remains a threat, and I know that the fight against these terrorist groups is a priority of your government," Macron said after meeting Iraqi Prime Minister Mustafa al-Kadhemi.

However, France also seeks to advance its economic interests in the country.

On September 6, French energy giant Total and Iraq signed contracts worth $27 billion to develop oil fields, natural gas, and a crucial water project that officials said will be key for the oil-rich country to maintain crude output.

The deals were signed with Kadhimi in attendance, according to a statement from Baghdad’s Ministry of Oil. Total and the ministry agreed that the French company would develop the Ratawi oil field in southern Iraq, a gas processing hub to capture natural gas from five southern oil fields. They also agreed on a project to treat Gulf seawater and inject it into reservoirs to maintain oil production levels. A fourth project was signed with the Ministry of Electricity to build a 1,000-megawatt solar power plant.

As France does not have a bloody legacy in Iraq, it would make it easier for Paris to become a respectable actor in the country.

Paris criticised the US and UK invasion in 2003, which saw a continued presence of troops of both countries, as Iraq descended into instability. France’s then-Foreign Minister Dominique de Villepin even received thunderous applause for his speech against the Iraq War at the UN in 2003.

Moreover, despite avoiding becoming embroiled in the war, Paris has managed to have a say in Iraq’s post-invasion politics, as it was one of the first countries to recognise Baghdad’s parliamentary political system. It has continued efforts to bolster Iraq politically, such as providing 500,000 euros ($58,000) to a UN-led project to monitor the county’s upcoming Council of Representatives elections on October 10.

As Baghdad seeks to become an independent regional actor, it is losing patience with Washington’s influence.

Al-Kadhemi previously told Biden that he didn’t want any US troops stationed in Iraq. And in January 2020, the Iraqi parliament passed a resolution calling on the government to expel foreign troops from the country. This move was clearly directed mostly at the US, as the resolution called to file a complaint to the UN against Washington’s "serious violations and breaches of Iraqi sovereignty and security."

Meanwhile, al-Khademi’s receptivity towards Macron’s overtures indicates Baghdad does not hold such enmity towards France’s interests and presence in the country.

Macron has further aimed to boost this ‘benevolent saviour’ image, which critics say he pursued following his visits to Lebanon after the explosion in Beirut in August 2020, while Paris seeks to become a stronger player in Iraq.

During his recent declarations, Marcon toured the ruined city of Mosul, previously a Daesh stronghold until the US-backed Iraqi army liberated the city from the extremist group’s control in 2017. He also visited a holy shrine in Baghdad before flying to the northern city of Erbil, where he met 28-year-old activist and Nobel Peace Prize laureate Nadia Murad, who was forced into sexual slavery by Daesh militants.

However, Macron’s dreams of fortifying France as Iraq’s protector could face challenges.

Its military presence could not be a guarantor of security, given its currently limited number of troops. A larger military scale up in the country would be needed, which France may be unable to provide, given the number of other actors in the country. Moreover, it is likely that even Washington will continue to provide some air and security support for Iraq.

Additionally, although Iraqis are becoming weary of Iran’s interference in the country, there is continued Iranian dominance in the country, with its militias being prominent actors and granting Tehran sway over Iraq’s parliament.

Not only that, but it could also trigger increased tensions for a country that has already been stricken with regional competition, whether it be from Saudi Arabia, the US, or Iran.

Although France has recently attempted to repair ties with Turkey, its presence could prompt a new source of regional tension.

Paris has tried to use regional actors to undermine Ankara in the past. Last year, a French delegation met with representatives of the northern Syrian Kurdish political parties, including the PYD. Many observers labelled this an attempt to irk Turkey, as the PYD’s military wing, the YPG, is close to the PKK which Ankara, the US and the EU have designated as a terrorist organisation and has carried out deadly attacks on Turkish soil.

Turkey has even engaged in counter-terrorism operations against PKK targets in northern Iraq, while it has also invested significantly in the country, and created strong bilateral trade ties. Although France may not have interests in empowering Iraq’s Kurdish parties at this point, its wider actions could be an attempt to jostle with Turkey.

Therefore, while France may present itself as having altruistic motives, its actions could have adverse results on Iraq, and Paris is still limited in what it can achieve. 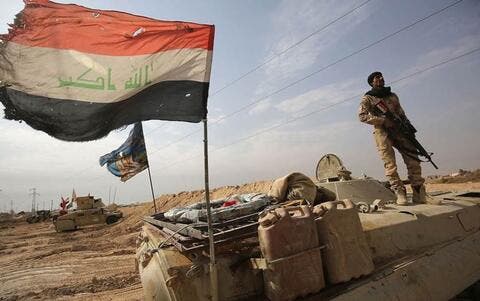 Only by providing genuine investment into the country and its security, along with the wider international community, can it help Baghdad achieve much-needed improvements to its political stability.

Jonathan Fenton-Harvey is a journalist and researcher, who focuses on political issues and humanitarian crises in the Middle East and North Africa. @jfentonharvey