Israel is in the Forefront of War in South Sudan 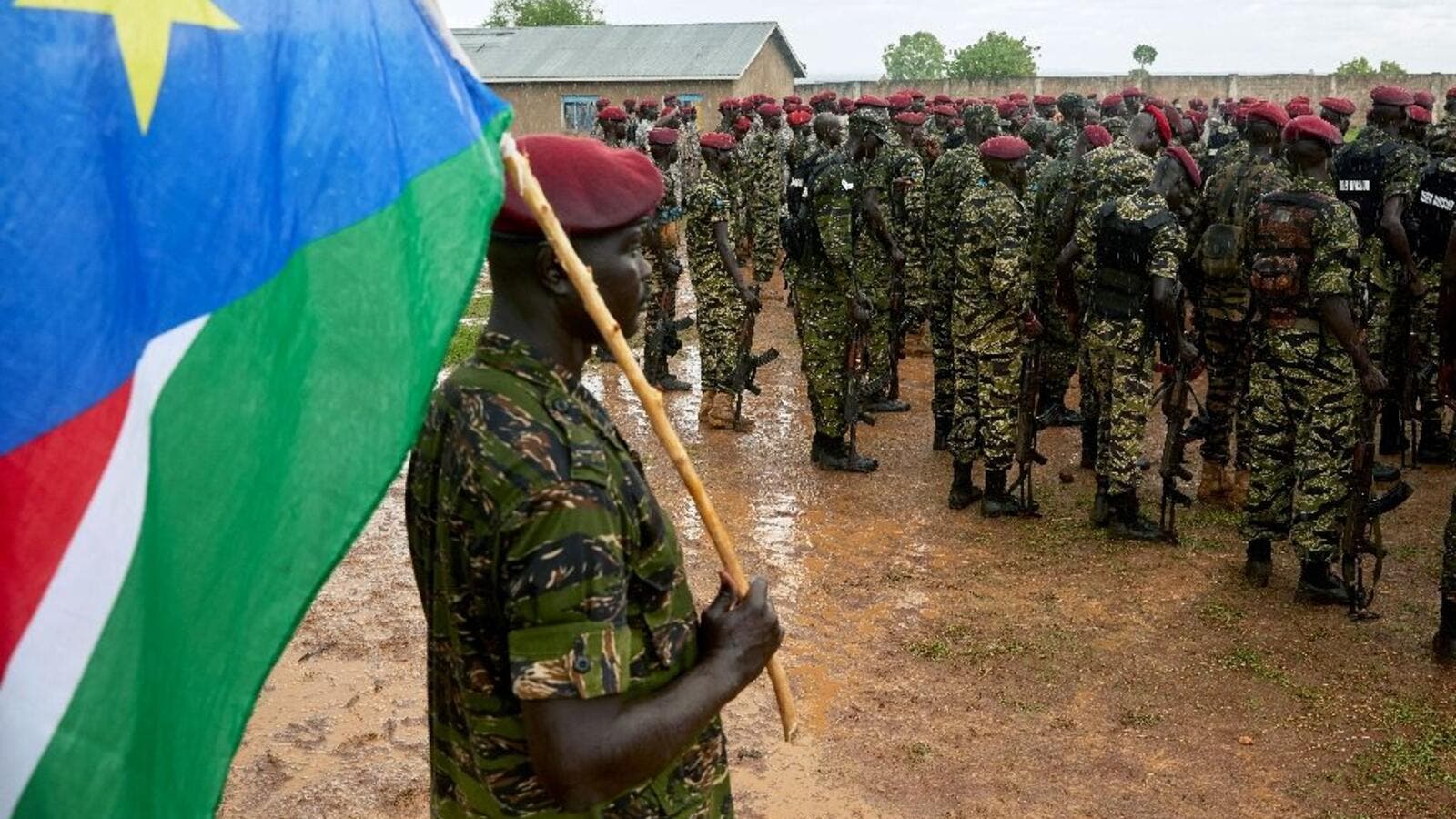 Since South Sudan gained independence in 2011, Israel has continuously sold it weapons, surveillance technology and provided military training and security, much of which has been used to commit war crimes, and potentially crimes against humanity in the civil war that begain in 2013.

In March 2015, the UN Security Council adopted a ban on weapons sales to the warring sides. A committee of experts was established to monitor the implementation of the sanctions or their violation, and released its report in August 2015. It concluded that both sides in the country's civil war were managing to buy arms despite the weapons ban.

Apart from Ukranian and Chinese weapons, the damning report also showed photographic evidence of Israeli ACE assault rifles in the arsenal of South Sudan's military and government-aligned militias as well as opposition forces.

Bodyguards of high-ranking politicians and senior army officers also carried the weapons. Israel says it sold the weapons before the civil war began. Government forces, however, used those rifles in a December 2013 attack on members of the Nuer tribe - an incident that is considered the starting point of civil war in South Sudan.

The UN report also revealed that Israel sold wiretapping equipment to South Sudan even after the civil war broke out, which was used to identify and arrest opponents of the government.

According to Israeli attorney and activist, Eitay Mack, Israel not only installed this listening equipment for the South Sudanese government, but also continued to operate it via Israeli technicians stationed in South Sudan. Mack also said the arrests cited in the UN report targeted not only opponents of the regime, but also journalists.

The UN report also revealed that Israel sold wiretapping equipment to South Sudan even after the civil war broke out
Following the publication of the report, members of the UN's panel of experts met with senior officials from the Israeli foreign and defense ministries. Israeli officials assured the delegation that Israel would suspend transfers of lethal equipment to any party in South Sudan, a decision that would be fully implemented and remain in force.

This did not happen. The Israeli Ministry of Defense continued to grant export licenses to Israeli weapons companies to sell $150 million worth of lethal weapons through the Green Horizon project.

The sheer scale of the violence and bloodshed in South Sudan forced the European Union to slap an arms embargo on South Sudan in 2014. The United States also suspended military aid and issued sanctions against the country's military leaders.

In July 2018, the UN Security Council finally adopted an arms embargo as part of a concrete effort to end the flow of weapons. The African Union even expressed support for the imposition of sanctions on leaders who are prolonging the conflict, and enabling ceasefires violations in South Sudan by providing weapons.

Throughout it all, Israel - in a throwback to its arming of apartheid South Africa - showed that it had no qualms selling weapons to a regime that had been universally shunned.  South Sudanese officials, along with other genocidal regimes, were even welcomed at a weapons expo in Tel Aviv in June 2015.

"Think about that for a minute. A country in which crimes against humanity are perpetrated at this very moment, using foreign weapons and under a complete weapons embargo by the US and Europe, sends a military acquisitions delegation to Israel and it is welcomed with open arms," said Eitay Mack at the time.

In May 2017, a group of 54 Israeli activists, led by Mack, filed a petition with the Israeli High Court seeking a criminal investigation into Israel's exporting of arms to South Sudan.

They wanted the Foreign and Defence Ministry officials who approved weapons sales to South Sudan to be investigated as possible accessories to war crimes and crimes against humanity. Additionally, they asked that a criminal investigation be opened against the holders of the arms export licenses.

After Israel's assurance to the UN panel was reported in the media, Israeli MP, Tamar Zandberg, asked the defense minister to review all the export licenses the ministry had granted to ensure they included no weapons. "We want to know what's being done in our name, whether people are dying from weapons we sold, and if women are being raped with an Uzi or Galil rifle pointed at their head," Tamar said.

The overall aim of the legal action was to achieve greater transparency and public oversight of Israel's military exports. Activists have been unsuccessful in this regard because Israeli courts have imposed gag orders on the petitions, the arguments presented in the case, and the court's rulings.  This has maintained the secrecy and murkiness of Israel's arms export licensing process.

Yotam Gidron, whose forthcoming book Israel in Africa focuses on Israel's relationships with African countries, believes that arms exports to African countries are a fundamental component of Israel's diplomacy on the continent.

"For decades, Israel has invested very little in its formal diplomacy in the continent and has instead relied on various private entrepreneurs and intermediaries to sustain its relationships with African leaders." This is a prime example of the middle-man approach to diplomacy that Israel has employed in Africa.

Throughout it all, Israel - in a throwback to its arming of apartheid South Africa - showed that it had no qualms selling weapons to a regime that had been universally shunned.

Israel recognises the economic benefits and diplomatic importance of exporting arms to African countries that it has field-tested on Palestinians in the Occupied Palestinian Territories. This is why the Israeli government actively encourages and fiercely protects weapons exports to Africa. It also explains why the efforts of Mack and other activists have been stonewalled by Israel's government and the courts.

Over the past few years, freedom of information requests have been filed with Israel's Defence Ministry, seeking documents concerning Israeli arms deals, consulting contracts, and training of armed forces not only in South Sudan, but Rwanda, Myanmar, Sri Lanka and Serbia during decades of genocide and ethnic conflict in those nations.

Activists wanted to learn the extent of the trade, what weapons were supplied and to whom, how the weapons were used, and how long the trade continued.

In every instance, the ministry denied their request, and they were forced to appeal to the Supreme Court. In every appeal, the court has sided with the military and ruled that such information was sealed from public view in order to protect the security of the nation.

"It's absurd that Israel, which was established in the wake of the Holocaust in Europe, is hiding documents relating to genocide," says Mack.

Israel's current involvement in South Sudan is "exceptional" in its history of military exports says Mack. "This goes way beyond greed. Israel is currently fighting over the viability of a project that it has invested much in over the years."

Although the nation-state of South Sudan is less than a decade old, friendly ties with Israel date back to the 1960s, when the Israeli Mossad first provided military support to southern Sudanese rebels fighting for independence, says academic and author, Yotam Gidron. The Mossad even produced propaganda materials on behalf of the southern Sudanese rebel group, Anya-Nya, between 1969 and 1971.

Israel recognised South Sudan within 24 hours of it declaring its independence on 9 July 2011. "For Israel, ties with South Sudan represented an avenue for curbing Arab and Iranian influence in the Horn of Africa, particularly since Sudan used to be Iran's most important ally in this region and facilitated the transfers of arms into Gaza.

For South Sudan, close ties with Israel helped secure and maintain American sympathy and support, which partly explains why it continues to have one of the most pro-Israeli voting records in the UN of all African nations," explains Gidron.

According to Eitay Mack, Israel must completely halt all military and security-related exports to Sudan. This is the only way to guarantee that it is not complicit in war-crimes and crimes against humanity.

As long as the weapons flow and the military training continues, Israel - and other countries that violate the arms embargo on South Sudan - are giving both sides in this grinding conflict false hope that a military victory is possible.

As the weapons continue to flow, so too will the blood. It is time to starve this war of weapons.

Suraya Dadoo is a South African writer and author focussing on Israel's occupation of Palestine.