In a virtual event held on Tuesday, Apple's CEO has announced the latest devices developed by the tech giant. The major surprise of the annual event was that Apple has no new iPhone devices for its customers this year, for the first time ever.

Back up. Know your Apple ID. Update your devices! ?

Check out our playlist on YouTube to get ready for iOS 14, iPadOS 14, and watchOS 7: https://t.co/QYyCQ8unrV pic.twitter.com/SKCNAzfy3u

In this online appearance from California's Apple Park introducing the most recent innovations created by Apple, Tim Cook has presented two new iPads and two smartwatches, in addition to a vibrant new design of the Apple logo that made many users mesmerize the colorful logo of the good old days.

Responding to requirements of 2020 ravaged by the coronavirus pandemic, the new flagship smartwatch has been equipped with all the fitness features customers are used to, in addition to a sensor that measures oxygen levels in the blood. This add-on is expected to draw the attention of millions of users, who don't mind investing in their health especially now, as the world continues to tackle the Coronavirus. 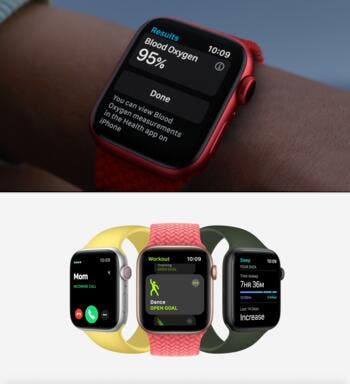 Additionally, the Series 6 watch offered yesterday by Apple for $399 USD will have an (Always on Display) feature for the first time, which could minimize users' need to touch it in order for them to read the time or find out whether or not there are new notifications. This comes in handy at a time the world is trying to limit physical contact with objects so as to limit the spread of COVID-19.

Moreover, Apple has also clearly taken notice of the global economic meltdown which might have inspired its decision to offer its new devices at very affordable prices in comparison with past releases.

For instance, Apple's SE smartwatch is now available for only $279 USD.

Even when it comes to iPads, both new releases of iPad Air and the 8th generation of the device have ranged between $329 and $599 USD, making an impression that Apple devices are becoming more affordable in such hard financial conditions that have been affecting the whole world for several months.

Users in the Middle East and North Africa could actually be quite interested in purchasing a device that could help them monitor their own health conditions like the S6 smartwatch, especially now many Arab countries enter or warn of a second wave of the Coronavirus outbreak.

Finally, iPads are gaining even more interest among people, who have gone through a first lockdown experience as it allows members of families to watch their favorite shows separately as they spend most of their times at home, in addition to its significant role facilitating video calls, online conferences, and e-learning activities, all within the most routinely carried out activities during the quarantine.

Maybe Apple didn't release mind blowing new technologies this year, but it has clearly worked on offering devices that are much needed for the times we live in and has made them available to a broader base of users.

Are you interested in purchasing any of Apple's new releases?