Published July 4th, 2021 - 06:30 GMT
A human chain is formed by workers from the civil society, humanitarian aid, and medical and rescue services in a vigil calling for maintaining a UN resolution authorising the passage of humanitarian aid into Syria's rebel-held northwestern province of Idlib through the Bab al-Hawa border crossing with Turkey, near Bab al-Hawa along the motorway linking it to the city of Idlib on July 2, 2021. OMAR HAJ KADOUR / AFP
Highlights
Residents in refugee camps in Idlib criticize Russia's move to close Bab al-Hawa Border Crossing

Syrians who were displaced by attacks by the Bashar Assad regime and its supporters, and took shelter in refugee camps, consider the closure of the Bab al-Hawa Border Crossing "mass murder.” 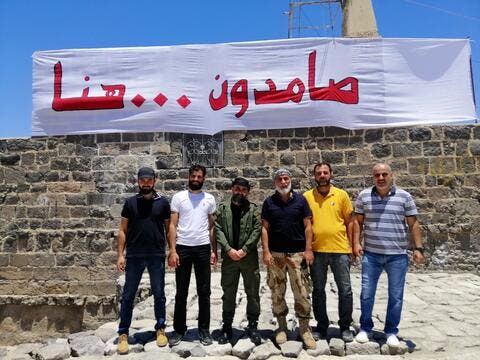 Who is Blockading Syria's Daraa?

Idlib falls within a de-escalation zone forged under an agreement between Turkey and Russia. The area has been the subject of multiple cease-fire understandings, which have frequently been violated by the regime and its allies.

More than 3,000 civil society, humanitarian, and medical workers stood together forming a 3 km human chain in support of maintaining the UN resolution for #cross-border aid into #Idlib through the Bab al-Hawa border crossing. The chain was organized by 50 Syrian org. pic.twitter.com/mBPFbPxWs3

Fear gripped millions of displaced civilians after Russia's move to block aid entering the country with the ongoing civil war from the Bab al-Hawa Border Crossing -- just across the Cilvegozu border gate in Hatay province in Turkey -- in line with a UN Security Council resolution.

Turki Sultan, who was displaced by the regime and its supporters with attacks in his town in Idlib in 2019, told Anadolu Agency that he took shelter in the Mahatta refugee camp in Idlib on the Turkish border.

He said the Bab al-Hawa Border Crossing is the "lifeblood" of civilians living in the region.

"If Russia manages to provide humanitarian aid through the Assad regime, it will be like giving a death sentence to 5 million people living in Idlib," he said. "Russia displaced us by bombing us. It killed and destroyed our homes. As if that wasn't enough, it set eyes on the humanitarian aid that came to us from Bab al-Hawa. They are playing with the lives of children and the elderly.”

Husain Ali Berjus, another refugee, said his house was destroyed in attacks by the regime and its supporter, Russia, in 2019.

"They bombed us. They destroyed our homes. They displaced us. As it was not enough, they covet the medicine and food that comes to us. Certainly, Russia shouldn't be able to do that," he said.

Abdulsattar Humaydi from Idlib's Saraqib district said he was displaced by the attacks from Iran, Assad, and Russia, and his family was able to survive thanks to the help from Bab al-Hawa.

"Russia's closing the Bab al-Hawa gate to aid means organizing a mass murder of the displaced," he said.

Noting that his purchasing power is low because he works as a daily worker, Humaydi said thanks to the aid, his children receive education and benefit from health services.

A human chain is formed by workers from the civil society, humanitarian aid, and medical ​in a vigil calling for maintaining a UN resolution authorising the passage of humanitarian aid into Syria's northwestern province of Idlib through the Bab al-Hawa border crossing#idlib pic.twitter.com/pIxCaS0Sn5

Muhammad Ali, also displaced from Saraqib, underlined that humanitarian aid from the Bab al-Hawa gate should continue to allow the displaced to survive.

He said the distribution of UN humanitarian aid through the regime at Russia's request means "rewarding the massacres" committed by the Assad regime. 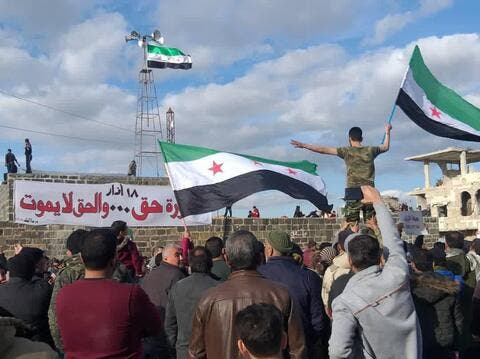 Syria has been ravaged by a civil war since early 2011 when the regime cracked down on pro-democracy protesters.