Published June 13th, 2021 - 10:47 GMT
Algerian elections staff count ballots for parliamentary elections at a polling station in Bouchaoui, on the western outskirts of the capital Algiers, on June 12, 2021. Ryad KRAMDI / AFP
Highlights
A huge number of candidates — more than 20,000 — are running for the 407-seat legislature

Algeria is voting Saturday in a parliamentary election overshadowed by a crackdown on a long-running protest movement that has campaigned for a mass boycott. 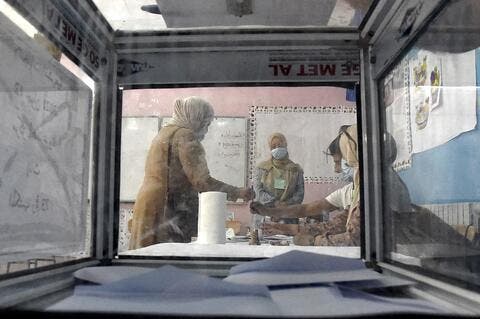 The early election is supposed to exemplify President Abdelmadjid Tebboune’s “new Algeria,” with an emphasis on young candidates and those outside the political elite. A huge number of candidates — more than 20,000 — are running for the 407-seat legislature, once dominated by a two-party alliance considered unlikely to maintain its grip on parliament. Islamist parties all offered candidates.

It is the first legislative election since former President Abdelaziz Bouteflika was forced from office in 2019 after 20 years in power amid protests over corruption, joblessness and repression. Tebboune was elected eight months later.

The Constitutional Council announced Saturday that it would be 15 days before results of the balloting are known because of the number of candidates and the need to ensure against fraud, which marked past elections.

The threat of boycott by the main opposition parties and Hirak supporters means the turnout may be low. Photos on social media showed images of some voting stations in the Kabylie region, east of Algiers, torn asunder with ballots strewn in streets. Kabylie, home of Berbers, is a traditional bastion of the opposition.

“I call on Algerians to vote massively … to deny the forecasts and catastrophic scenarios of the enemies of Algeria,” Communications Minister Ammar Belhimer said on Algerian television. He said that Algeria “doesn’t need international observers” to ensure transparent elections.

Women make up half of candidates for the first time, among efforts to make a fresh start. But women have been largely invisible from the campaign — their faces often blurred or concealed in campaign posters.

Candidates had just 20 days to campaign, and Algerian media said real debate on major issues of concern, like unemployment, was mostly absent.

“With such a slew of candidates, the calculation of power is simple: to elect a patchwork assembly, without a majority, which will allow the president to create his own parliamentary majority with which he will govern,” said political scientist Rachid Grime.

The protest movement, which had held weekly demonstrations for reform until they were effectively banned last month, has denounced the election as a “sham” that betrays the hopes of the hundreds of thousands of Algerians whose protests forced Bouteflika from power.

Seven leading protest movement figures were arrested ahead of polling day while police deployed heavily in the capital Algiers to preempt any attempt to protest.

The head of the Algerian League for the Defence of Human Rights, Said Salhi, has denounced the crackdown that preceded the vote.

The “repressive atmosphere and the restrictions placed on human rights and freedoms mean these elections have no democratic value”, Salhi said.

Farida Hamidi, a Paris activist of the protest movement, known as Hirak in Arabic, said the election meant little to young Algerians dreaming of change.

“We reject it all: the president, the parliament, the constitution, everything done by this military junta which has been ruling Algeria since 1962 — we want something else,” she said.

The Hirak has urged boycotts of all national polls since it mobilised hundreds of thousands of people in 2019 to force Bouteflika and his cronies from power, after the ailing president launched a bid for a fifth term.

It returned to the streets in February after an almost-year-long break due to the Covid pandemic.

But the government stepped up its crackdown against the Hirak last month, blocking protests and detaining hundreds of activists who have defied new restrictions on public gatherings.

President Abdelmadjid Tebboune claims to have responded to the Hirak’s main demands “in record time”, and says those still protesting are “counter-revolutionaries” in the pay of “foreign parties”.

Armed forces chief Said Chengriha has warned against any “action aimed at disrupting” the vote.

The protest movement says Tebboune’s past role as premier under Bouteflika confirms its narrative that the old guard, in power since Algeria’s 1962 independence from France, retains a firm grip on power.

Islamist parties are hoping to take advantage — but with their vote split between five rival factions, they may struggle to make real gains. 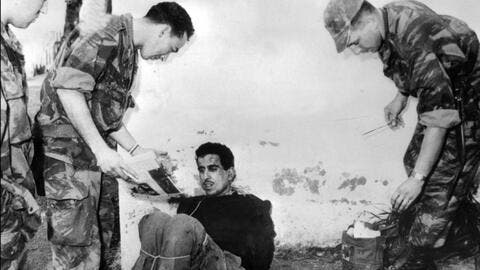 The Massacre of Algerians that France Has Buried

Africa’s fourth-largest economy is heavily dependent on oil revenues, which have slumped in the face of the global economic slowdown. Unemployment stands at more than 12 percent, according to World Bank figures.

It has also been hit hard by the coronavirus pandemic, which has claimed more than 3,500 lives in the country, according to the health ministry.