On Jeju Island, South Korea Has a Yemeni Refugee Problem 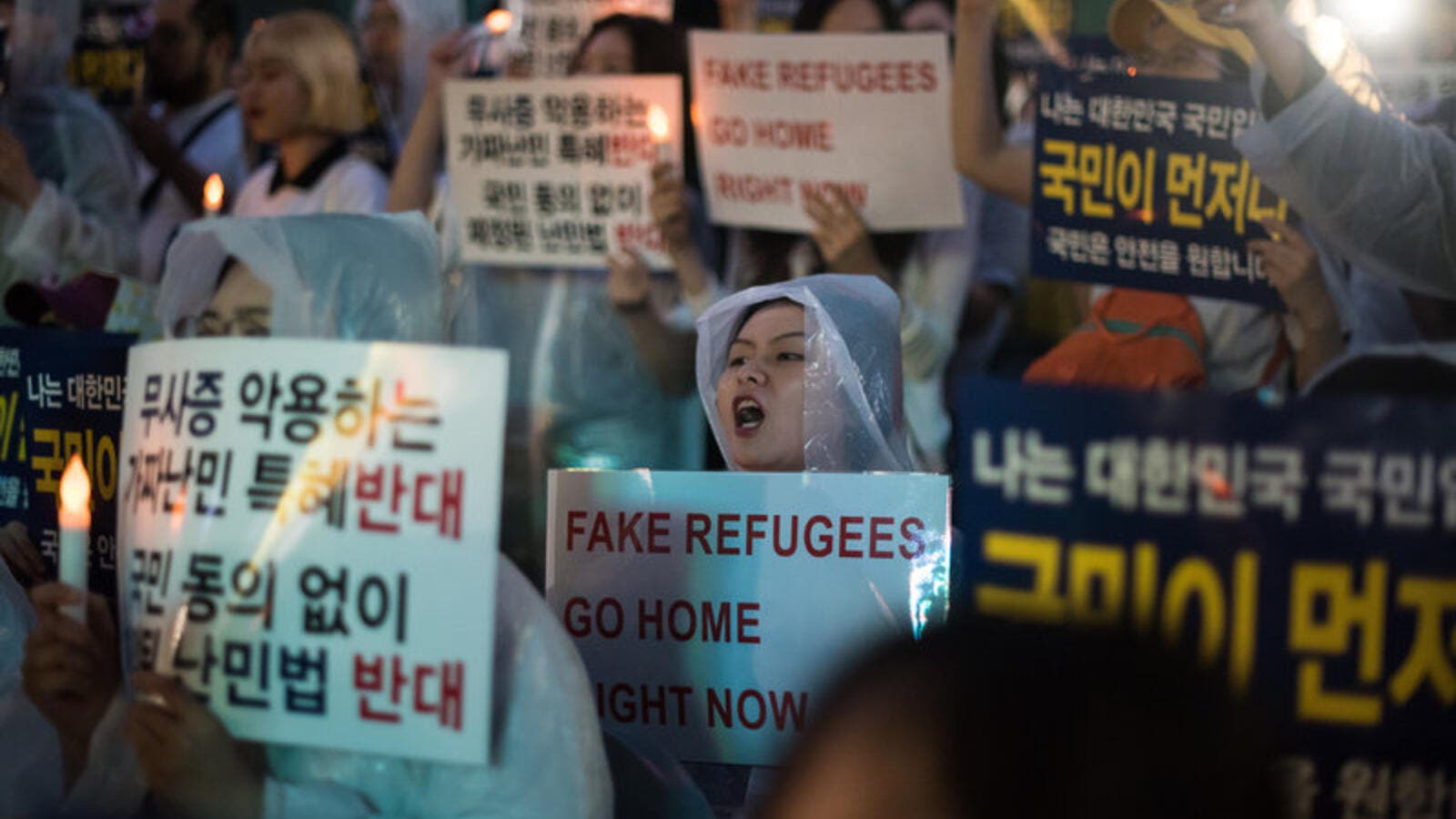 One of South Korea’s most visited tourist destinations is Jeju Island.

Located just off Korea’s southern coast, Jeju offers a moderate climate in every season, beautiful and scenic ponds and is relatively cheap to get to for a beach-going weekend. It is also home to about 500 asylum seekers from Yemen, who fled one of the world’s worst humanitarian crises only to be met with protests calling them fake refugees, demanding they leave.

South Korea has a refugee problem. Far-right and progressive movements inside South Korea have combined forces to reject the refugees, and though the government will decide on the asylum cases in the next six months, they accept only about one to two percent of all asylum seekers on average.

The government is stuck between a rock and a hard place: thousands of South Koreans have mobilized against the refugees to force them out, while scrutiny from media and activist organizations are letting the government know that ‘the whole world is watching.’

South Korea’s reaction to a handful of asylum seekers illustrates a broader trend happening in the world, where developed countries are lashing out against refugees from the Middle East, for fear their presence will bring crime and irreversible cultural changes.

How did 500 Yemeni Refugees Get to Jeju Island?

The most obvious question regarding the refugees is how they managed to get from Yemen to a little-known South Korean island.

A few Yemeni refugees trickled into South Korea before 2018. There were only 47 Yemeni asylum seekers in South Korea in 2017.

About 2,800 of them made their way first to Malaysia. Malaysia has a relatively relaxed policy towards tourism and visas, which allowed the asylum seekers to enter the country without a prior visa.

At the end of 2017, Air Asia began offering cheap and direct flights from Malaysia to Jeju Island. The island’s economy itself is based primarily around tourism and began to suffer when Chinese tourism to the island began to dry up. Many were concerned about the flare-up between North and South Korea and the subsequent deployment of Terminal High Altitude Area Defense (THAAD) systems made to intercept North Korean missiles.

As their 90-day visa free windows in Malaysia were running out, hundreds of the Yemeni asylum seekers flew to Jeju, which offers citizens of most nationalities 30-day stays without a visa.

“Refugees will always find a way to get to a place where they can find safety and stability,” said Evan Jones, Secretary General of the Asia Pacific Refugee Rights Network, to Al Bawaba.

“With the age of technology it is quite easy for people to search for countries where they may be able to enter on a visa waiver or tourist visa where the threshold to enter is not particularly high. In addition, when one refugees arrives in a country, they will often pass the message to friends /families back home, or in a third country, about this option.”

“Word of Korea spread fast among those Yemeni refugees in Southeast Asian countries because Korea is livable and as we recently have seen on this island, asylum seekers are even allowed to work here,” relayed Kim Dae-yong, who founded and is directing Jeju’s Islamic Culture Center.

According to Jones, who has been in contact with individuals close to the issue inside Korea, The Ministry of Justice tried to give the asylum seekers fishing and aquaculture farming jobs, eventually employing about 200 of them. This came as a relief to some on the island, as its fishing industry has been coping with chronic labor shortages in the ageing country.

However working conditions for the Yemeni men were too strenuous for some, said Jones, and so a portion of them quit: no subsequent efforts have been made to re-employ them.

They have been receiving assistance from local NGOs on the island, but in mainland South Korea, their very presence inside Korean territory is a threat.

South Korea Does Not Want Refugees

When news began surfacing that there was a few hundred Yemeni refugees on Jeju Island, South Korean civil society went up in a hailstorm of outrage.

Thousands took to the streets armed with signs that read “fake refugees; go home, right now,” South Korean social media exploded with rumors of deaths linked to the Yemeni refugees. The rumors turned out to be fake news, but the sentiment that these mysterious strangers who washed up on the shores of Jeju Island were dangerous, stuck.

As of press time, Over 714,000 signed a petition pressuring the South Korean government to reject the asylum seekers and send them back to Yemen, where a quarter of its population lives on the verge of famine, a vast majority are in desperate need of humanitarian assistance and whose lives are constantly at threat due to a stalemated war.

A strange coalition formed between progressive and right-leaning elements of Korea, united by the rallying cry to send the Yemeni refugees home. Critics of Islam, young and feminist activists in addition to the Korean middle class all feel threatened by the Yemenis’ presence. An opinion poll showed a majority of Koreans, 56 percent, are opposed to admitting the refugees compared to only 24 percent who want to admit them.

The government has responded by stopping the tourism loophole that allowed the Yemeni refugees onto the island: citizens of Yemen now require a visa before arrival. To make sure another incident like this does not happen again, the government also blocked visa-free entry from Ghana, Nigeria, Macedonia, Sudan, Syria, Afghanistan, Iran, Iraq, Kosovo, Cuba and Palestine.

“The anxieties and huge public backlash are related to a general anti-refugee sentiment that has always been simmering under the surface of Korean society, cultural differences, as you say, but also a strong element of Islamophobia,” Jones argued to Al Bawaba.

About 96 percent of Korean citizens are native-born Koreans, and most of the remainder are Chinese-born residents. In other words, South Korea’s hospitality towards Yemeni refugees has not been tested before, and many of its people are likely completely unaware to the humanitarian conditions Yemen suffers on a daily basis thanks to a never-ending war. Only beginning after 1994 did South Korea begin considering refugee applications.

Despite this, South Korea has its own obligations under international law to accept refugees. In 1992, it acceded to both the 1951 Convention Relating to the Status of Refugees and the additional protocol that updated the 1951 Convention. Its own National Refugee Act was enacted in 2013, which mandates the government to hear the cases of anyone who claims asylum in Korea.

Protestors are explicitly pinning the blame for the influx of refugees on this law, and the government has announced it is revising it to “prevent abuses,” and hire more staff to vet the background of refugees  to “quickly review and thoroughly verify identities so as to meticulously review potential for problems including terrorism and violent crime.”

Since accepting refugees in 1994, South Korea has only accepted 839 out of 40,470 applications, meaning only two percent of considered asylum requests were considered legitimate in the eyes of the government. From these numbers, Yemeni asylum seekers stand little chance of being granted refuge.

The Growing Abyss of the Global Displacement Crisis

Yemeni children at a camp for displaced persons in Nehm region, west of Marib city (AFP/FILE)

The public perception of the Yemeni refugees is that they bring with them a kind of sexual predation that endangers women, a faux-sense of victimization from an obscure war, and an incompatible set of social values that contradicts Korea’s own. The anti-refugee backlash in Korea is a microcosm for the global sentiment against asylum seekers fleeing violence in the Middle East: many of these suspicions are projected onto Syrian refugees attempting to enter into Europe, and the platforms of nationalist parties include calls to limit quotas on refugee intake and maintain the "heritage" of their respective nations.

Countries like South Korea may technically control who gets to claim refuge inside their gates, but they cannot reverse the fact that there are more displaced people now than at any other point in recorded history according to the United Nations.

The crisis is already there and cannot be disavowed by suspicions that these refugees are really just opportunistically seeking higher wages in rich countries.

Denying asylum to 500 Yemeni men won’t significantly worsen the crisis of displacement, but it would contribute to the general trend among many developed nations that have gazed into the abyss of the worst humanitarian catastrophe unfolding in the world today, and shut their doors.

Much of the world has denied Yemeni asylum seekers refugee status. In 2016, 344 Yemenis applied for asylum in Canada; only five were accepted. The United States bars Yemeni refugees from entering thanks to president Donald Trump’s travel ban.