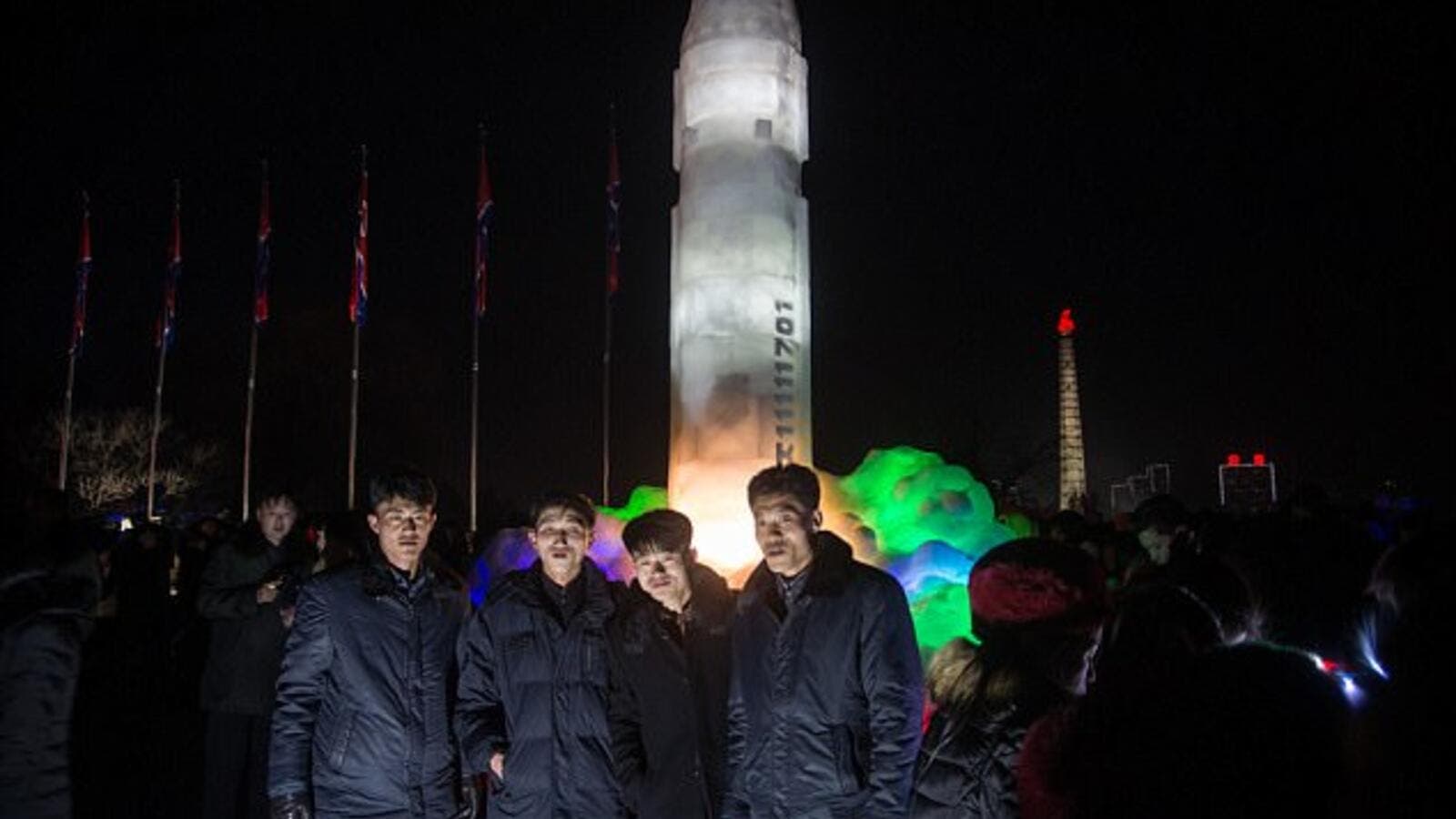 North Korea marked the New Year in typically hostile fashion by again threatening to launch a nuclear attack on the U.S. - while showing off its military might by using ice sculptures.

On New Year's Day, Jong-un said the U.S. will never be able to start a war against North Korea now that his country has developed the capability to hit all of the U.S. mainland with its weapons.

"The entire United States is within range of our nuclear weapons, and a nuclear button is always on my desk," Kim said during a televized New Year's Day speech.

"This is reality, not a threat."

The North Korean leader also called for improved relations with the South, an idea mentioned in speeches more often than it is met.

He said the Pyeongchang Winter Olympics would be a good opportunity to showcase the status of the Korean nation.

He said the North and South could meet urgently to discuss the North sending a delegation.

"The Winter Olympic games that will be held soon in the South will be a good opportunity to display the status of the Korean nation and we sincerely wish that the event will be held with good results," he said.

The New Year's address is an annual event in the North and is watched closely for indications of the direction and priorities Kim may adopt in the year ahead. The day before, many of the isolated nation's citizens spent New Year's Eve at the Pyongyang Ice Sculpture Festival on Kim Il Sung Square.

There, visitors took pictures with sculptures inspired by the North Korean leader's determination to build a nuclear arsenal.

Taking pride of place at the festival was a massive ice sculpture depicting a Hwasong-15 intercontinental ballistic missile (ICBM).

Earlier on Sunday, Mike Mullen, a former top U.S. military officer, warned the US is closer than it has ever been to nuclear war with North Korea.

"And in my view, an incredibly dangerous climate exists out there in that uncertainty with how this all ends up," he said on ABC's 'This Week." "One in particular that is top of the list is North Korea."

"We're actually closer, in my view, to a nuclear war with North Korea and in that region than we have ever been," he said, adding, "I don't see the opportunities to solve this diplomatically at this particular point."

"Will he follow through on his rhetoric? Or will we actually be able to get to a situation where it could be solved peacefully?" Mullen asked.

"I'm just more inclined to see over time that the rhetoric seems to be where the president is, and that will limit the constraining ability that both Jim Mattis and H.R. McMaster and John Kelly have," he said.

Trump warned in a speech to the U.N. General Assembly in September that the United States 'will have no choice but to totally destroy North Korea' if forced to defend itself or its allies.

In August, he vowed to unleash "fire and fury" on North Korea if it continued to threaten the United States or its allies.

Pyongyang conducted its sixth nuclear test September 3 and, despite escalating sanctions, on Nov. 28 it test-launched an intercontinental missile capable of striking the United States.

Republican Senator Lindsey Graham, who warned Sunday of a sharp increase in the risk of pre-emptive attack if North Korea conducts any more tests, said Trump had decided early on to deny North Korea the capability to strike the United States with a nuclear-tipped missile.

"2018 will be a year of opportunity and extreme danger," Graham said on CBS's "Face the Nation."

"Now, the Iranians are watching the way he engages with North Korea, and vice versa. So we've got a chance here to deliver some fatal blows to really bad actors in 2018. But if we blink, God help us all."

This article was adapted from its original source.