The US Fears More Deadly Attacks on Kabul Airport

Published August 29th, 2021 - 09:27 GMT
Taliban Badri fighters, a "special forces" unit, stand guard as Afghans, hoping to leave Afghanistan, wait at the main entrance gate of Kabul airport in Kabul on August 28, 2021, following the Taliban stunning military takeover of Afghanistan. (Photo by WAKIL KOHSAR / AFP)
Highlights
Biden said that he was informed by his commanders that an attack is highly likely in the next 24-36 hours at Kabul airport

US military commanders believe that new terror blast like the deadly attack at Kabul airport is "highly likely in the next 24-36 hours," President Joe Biden has warned. 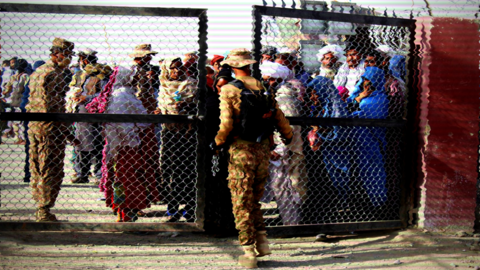 After a briefing from his national security team, Biden said in a statement that a US drone strike targeting the Daesh-Khorasan group, which claimed responsibility for Thursday's carnage at the airport, was "not the last."

NATO statement:
We regret to inform you that international military evacuations from Kabul airport have ended and we are no longer able to call anyone forward for evacuation flights. We will keep lists of all of you who have registered ….

"The situation on the ground continues to be extremely dangerous, and the threat of terrorist attacks on the airport remains high. Our commanders informed me that an attack is highly likely in the next 24-36 hours," Biden said.

Scores of Afghan civilians were killed in the Kabul bombing on Thursday, along with 13 US troops, several of them born around the time US military operations in Afghanistan began 20 years ago.

The Pentagon said Saturday it had killed two "high profile" targets, logistics experts for the militant group, and wounded another in a drone strike in eastern Afghanistan in retaliation for the suicide bombing.

No civilians were hurt in the attack, Major General Hank Taylor told a news conference in Washington.

"The fact that two of these individuals are no longer walking on the face of the Earth, that's a good thing," Pentagon spokesperson John Kirby said.

US rushes to complete evacuations

US troops have been scrambling in dangerous and chaotic conditions to complete a massive evacuation operation from the Kabul airport by an August 31 deadline.

Biden has pledged to stick to the agreed cut-off and had vowed to punish those responsible for the suicide blast. He said Saturday that the drone attack would not be the last.

"We will continue to hunt down any person involved in that heinous attack and make them pay," he said.

Average age of the 13 Americans killed in action at the Kabul airport: 22

"Whenever anyone seeks to harm the United States or attack our troops, we will respond. That will never be in doubt."

Taliban forces sealed off Kabul's airport on Saturday to most Afghans hoping for evacuation, as the US and its allies wound down a chaotic airlift that will end their troops' two decades in Afghanistan.

Western leaders acknowledged that their withdrawal would mean leaving behind some of their citizens and many locals who helped them over the years, and they vowed to try to continue working with the Taliban to allow local allies to leave after President Joe Biden's Tuesday's deadline to withdraw from the country.

Although most of its allies had finished their evacuation flights, the US planned to keep its round-the-clock flights going until the deadline, saying 117,000 people had been evacuated since the Taliban claimed Kabul on August 15. Biden warned Saturday that commanders had told him another attack was “highly likely in the next 24-36 hours.”

Britain was carrying out its final evacuation flights Saturday, though Prime Minister Boris Johnson promised to “shift heaven and earth” to get more of those at risk from the Taliban to Britain by other means.

Britain’s ambassador to Afghanistan, Laurie Bristow, said in a video from Kabul airport and posted on Twitter that it was “time to close this phase of the operation now.” 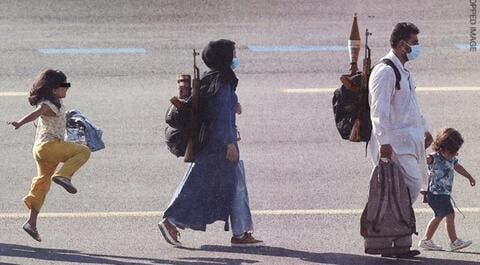 “But we haven’t forgotten the people who still need to leave,” he said. “We’ll continue to do everything we can to help them. Nor have we forgotten the brave, decent people of Afghanistan. They deserve to live in peace and security.”

As the flow of planes leaving Kabul slowed, others arrived in locales around the world carrying Afghans who managed to secure places on the last evacuation flights, including in the Washington area, Philadelphia, Madrid, Birmingham, England, among others.
Some were relieved and looking forward to starting their new lives far from the Taliban, but others were bitter about having to flee.