Published May 18th, 2021 - 06:51 GMT
People hold placards to express their support for Ethiopia's mega-dam on the Blue Nile River as faithfuls gather to attend the Eid al-Fitr morning prayer sermon at a soccer stadium in Addis Ababa, Ethiopia, on May 13, 2021 as Muslims across the globe mark the end of the Holy month of Ramadan. Amanuel Sileshi / AFP
Highlights
Egyptian president praises Khartoum’s efforts to promote economic structural reforms

Egypt and Sudan affirmed during a meeting in Paris, France that the issues related to the Renaissance Dam are a matter of national security.

They said that the two countries would agree to reach a fair and binding legal agreement regarding the process of filling and operating the Renaissance Dam in a way that takes into consideration the common interests of all parties involved.

Impressive work going on the middle corridor of Renaissance dam.
The 4 m top from 560 to 564 m has been effectively finished above sea level.#Ethiopia will reach 580 meters above sea level and reserve a quantity exceeding 9 Bcm′′ 4.5 billion more than the current one in Dam ′′ pic.twitter.com/NeJgzQqUJR

The talks also focused on developments along the Ethiopia-Sudan border, as well as issues related to crises in the region, and called for cooperation to continue between Egypt and Sudan.

President El-Sisi praised the strong relations between the two countries, expressing Egypt’s aspiration to deepen their ties in a way that contributes to achieving mutual interests, especially at the security, military and economic levels.

El-Sisi affirmed Egypt’s keenness to participate in the International Conference to Support the Sudanese Transition, which has the aim of achieving political and economic stability in Sudan.

The Egyptian president also referred to the link between Sudanese national security and that of Egypt and the historical ties that bind the two Nile Valley nations.

Egypt will take part in the international initiative to settle Sudan’s debt by using its share with the International Monetary Fund.

El-Sisi praised the steps that Sudan is taking in the direction of structural economic reform.

Ethiopians come out in mass in support of the Grand Ethiopian Renaissance dam. https://t.co/Z9XJBuFOVl

“These measures reflect a real political will to make the transitional stage successful,” he said, adding that Egypt was ready to apply its experience in economic reform in training Sudanese cadres.

El-Burhan expressed Sudan’s deep appreciation for Egypt’s efforts to support the country during its transitional phase. 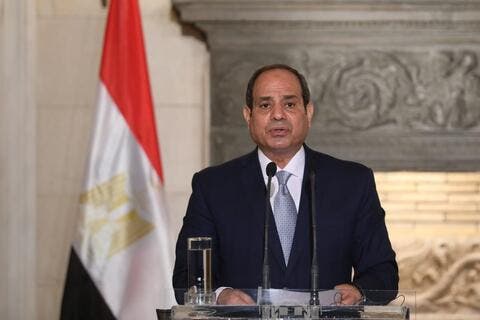 “Such efforts are embodied in the president’s keenness to personally participate in the current Paris conference to support Sudan, consolidating the strength of extended ties between the two countries,” said El-Burhan.

He affirmed that there were broad prospects for developing cooperation between the two countries and underlined Sudan’s eagerness to provide a supportive environment to this end.