While Iranians are protesting against the Islamic Republic's harsh restrictions against women which consequently led to the death of Mahsa Amini in morality police's custody last Friday, 60 Minutes reporter Lesley Stahl is under fire for wearing Hijab 'headscarf' during the interview with Iranian President Ebrahim Raisi. 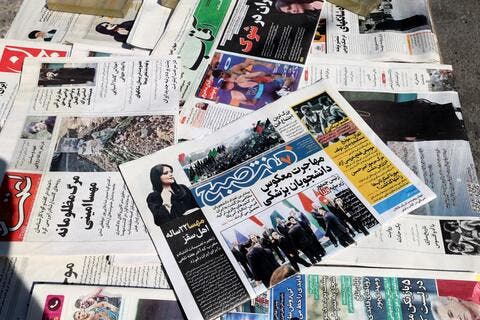 Iranian President Raisi appeared in an interview with 60 Minutes at the presidential compound in Tehran on Tuesday for his first interview with a western reporter on Sunday night, days before the president's official visit to the United States to attend the 77th session of the UN General Assembly which is taking place today September 20th, 2022.

In the same week that Iran’s police murders 22-year-old #Mahsa_Amini for improper hijab, 60 Minutes airs an interview with Iranian President conducted by a Western woman Lesley Stahl wearing hijab in deference to the oppressive laws of a misogynistic regime #مهسا_امینی pic.twitter.com/TnzHLvoGAo

Massive protests have erupted across Iran following the death of 22-year-old Mahsa Amini who was arrested by the morality police days ago for the improper wearing of the hijab. According to eyewitnesses, she was brutally attacked in the back of a police van causing her death after spending days in a coma.

Women's rights advocates and protesters strongly slammed Iranian laws that led to the death of Mahsa Amini while chanting the slogan 'death to the dictator'. Other women have removed their Hijabs on the streets and burned them to show support for the rallies against Iranian authorities' restrictions which deprives women of their simplest rights.

This is Iran today. A woman proudly burning the most visible symbol of religious dictatorship; compulsory hijab.
Hijab police killed #MahsaAmini but now there are millions of Mahsa in Iran who are shouting NO to Forced hijab NO to gender apartheid regime.#مهسا_امینی pic.twitter.com/9tzd9IRwgB

Other women decided to protest in their own way as they started a campaign where they appear in videos cutting their hair to denounce the hijab's compulsory regulations which are imposed by the Iranian government.

Hashtags, including #Mahsa_Amini, #JusticeForMahsa and #مهسا_امینی, have accompanied videos and photos released from the violent protests in Iran to show support for Mahsa Amini who was killed at the hand of the morality police for wearing the hijab in the wrong way.

Iranian forces were also deployed across the country to depress the protesters using water cannons and live fire. A video of a 10-year-old girl in Boukan was widely shared online showing the little girl in the hospital after being injured by anti-riot police during mass protests.

At the end of what seemed to be a cordial interview with Iranian President Raisi Tuesday, a member of his staff reached up and blocked one of the cameramen from filming Lesley Stahl’s goodbyes and took a cameraman’s phone for 2.5 hours. https://t.co/CChTRxk3NR pic.twitter.com/AWelpHx4DG

German Commissioner for Human Rights and Humanitarian Assistance shared a tweet commenting on Mahsa's death: "The death of #Mahsa_Amini makes me sad and furious. Especially because violence and repression are an everyday reality for women in #Iran . It is absolutely essential that the death of #MahsaAmini is investigated properly. We grieve with Mahsa’s family and loved ones."

🇮🇷#Iran: Acting UN Human Rights Chief calls for investigation into #Mahsa_Amini's death in custody following her arrest for what was perceived to be “improper” hijab. @NadaNashif also condemns the violent response by security forces to ensuing protests.
👉 https://t.co/S9Yxr46Ffk pic.twitter.com/Q5pPkKCoXY

Furthermore, the Iranian leader's interview was criticised also by the crew of 60 Minutes, as they said that one of Raisi's staff members blocked one of the cameramen from filming Lesley Stahl’s goodbyes. He also allegedly took the cameraman's phone for around 3 hours.