'The Dutch Rising'? Why Are Netherlands Farmers Protesting?

For several days now, Dutch farmers have been taking to the streets in a number of regions across the Netherlands, which has prompted several questions about their motives, the media coverage, and the way the police have been handling the protests.

Several Dutch social media users have been posting photos and videos showing the ongoing protests organized by farmers' groups in the country, following a government plan believed to harm their businesses.

The DUTCH RISING : Farmers , fishermen and citizens try to bring the country to a standstill to protest against globalist climate policies ( WATCH ) pic.twitter.com/ewC0vDQL0G

However, in recent days, protests seemed to get more violent than anticipated, especially after reports of Dutch police firing warning shots at crowded tractors and trucks that have been used by protesting farmers to blockade supermarkets' distribution centers in the city of Venlo, to the south of the Netherlands.

The Netherlands 🇳🇱 is the second-largest exporter of agriculture in the world. So the farmer’s protest and blockade has huge repercussions for the global food supply chain. https://t.co/vhg4oHzhPJ

While no one has been injured, three protestors were arrested by the Dutch police, according to the Washington Post.

🇳🇱 : Dutch farmers have shut off access to supermarket distribution centers to protest the government’s green reforms, a move that would hit the nation’s agricultural sector - local media

Meanwhile, many attacked mainstream media in the Netherlands and Europe for what they described as "ignoring the farmers' protest" to protect EU agendas and policies. 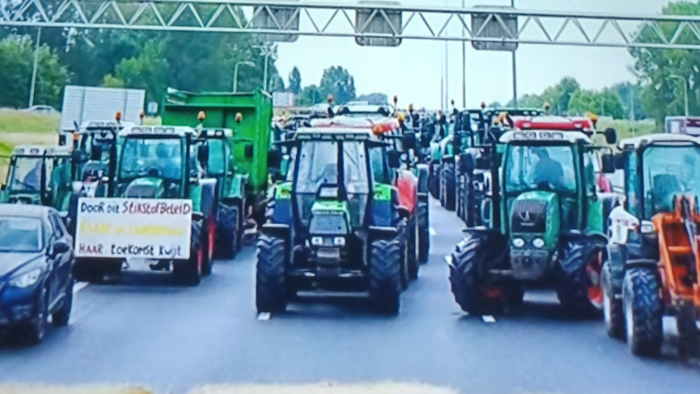 Why Are Netherlands Farmers Protesting?

For weeks, Netherlands farmers started protesting against a legislative proposal that aims to lower the production of harmful emissions, such as nitrogen and ammonia, in an effort to further tackle climate change.

Blockade of Groningen Airport in the Netherlands as farmers protest the closure & destruction of farms & killing of livestock all in order to bring in domestic laws with WEF'S nitrogen reduction policy. 🧑‍🌾 🚜 🇳🇱 pic.twitter.com/UP0Dib9wci

The new rule would restrict several farming practices within a year, including cow farming and the use of chemical fertilizers in agriculture, which could eventually result in financial losses on the farmers' part.