What Is Going on in Sudan? Photos and Videos Show Response to Ongoing Military Coup

Published October 25th, 2021 - 07:53 GMT
Sudanese protesters march in 60th Street in the capital Khartoum, to denounce overnight detentions by the army of members of Sudan's government, on October 25, 2021. (AFP)

In the early hours of Monday, millions of Sudanese people woke up to a military coup in their country, one that targets the civil figures of the government formed in Sudan following the 2019 revolution. 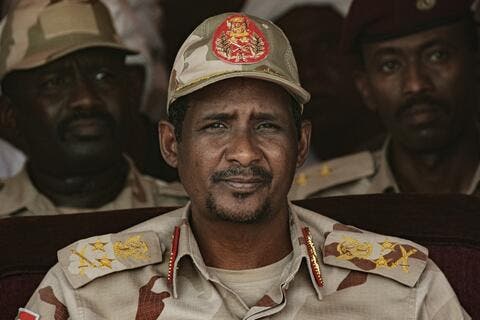 The second coup attempt in a month, one that seems more successful than the one that took place on the 21st of September 2012 was claimed by General Abdel Fattah al-Burhan, a leading military figure during the country's transitional period who is the Chairman of the Sovereignty Council of Sudan.

Even before the official statement made by al-Burhan to talk about the reasons that led to the "military action", online activists accused the Transitional Military Council, which has close ties with Egypt, Saudi Arabia, and the UAE of toppling the civil Prime Minister Abdalla Hamdok and a number of other ministers in his government.

#UPDATES Joint military forces are behind detention of civilian members of Sudan ruling council and ministers in transitional government, information ministry says, adding PM also detained after refusing to be “part of the coup” https://t.co/uKrkznriGS pic.twitter.com/BGjFafgQig

⚠️ Update: Internet connectivity in #Sudan is now severely disrupted with further cuts observed from 4:30 a.m. UTC, manifesting in a telecommunications blackout for many, amid reports of an military coup and the detention of senior government officials.

Ever since the military coup, Sudanese people have reporting significant internet disruptions, ones that have been confirmed by Netblocks and other websites.

However, online users have been able to upload photos and videos that show protestors taking to the streets in support of the Hamdok government and in rejection of al-Burhan's decisions.

#Sudan 🇸🇩: anti-coup protests have spread to cities and towns outside of the Three-Cities metropolis. Like here in #WadMadani. #SudanCoup#لا_للانقلاب_العسكري

Streets in Khartoum and a number of other cities had been drawing thousands of pro-democracy protestors for several before the coup, ones that have been demanding an end to the military rule of the country after the 2019 revolution which ended the Omar al-Bashir 26-years long rule.

Sudan has since been going through a transitional phase with a civil government led by now under arrest Prime Minister Abdalla Hamdok and a military council led by Abdel Fattah al-Burhan.

According to Abdalla Hamdok's office, the Sudanese Prime Minister and his wife were detained by a military force and taken to an unknown place after refusing to endorse the coup. However, al-Burhan told journalists in a press conference on Tuesday that the Prime Minister was held in the General's house "as a guest for protection". Later on the same day, Abdalla Hamdok was returned to his house along with his wife.

Online, several trending hashtags have been calling on all Sudanese people to join civil disobedience in rejection of the coup, including calls made by academics and doctors' union.