Published December 15th, 2022 - 07:54 GMT
Israeli Arabs celebrate Morocco's opening goal as they watch the Qatar 2022 World Cup football match between Morocco and Portugal, at a coffee shop in the Israeli-Arab town of Jaffa near Tel Aviv, on December 10, 2022. (Photo by AHMAD GHARABLI

For decades, the Arab world has suffered from disunity.

While it is connected by geography, language and culture, the region’s lack of cohesion has long allowed foreign powers to plunder its resources. The legacy of colonial divide-and-rule tactics remains pervasive, and parochialism has prevented Arabs from leveraging their huge oil wealth and relatively educated populations. But the 2022 FIFA World Cup has shown us another way.

Soccer has emerged as a great unifier following a string of unexpected victories for Arab countries. In November, Saudi Arabia beat Argentina, Tunisia defeated France and Morocco routed Belgium. Then, during the knockout stage, Morocco made history by eliminating both Spain and Portugal to become the first Arab and African country to secure a place in the semifinals.

Morocco’s victories were the result of a perfectly executed plan devised by coach Walid Regragui, who placed goalkeeper Yassine Bounou at the centre of the team’s strategy. Bounou repeatedly stymied Spain’s attempts to score and Morocco went on to eliminate the former world champion in penalty shootouts. Nor could Portugal’s attackers find a way to beat Bounou and Regragui’s side pulled off a stunning 1-0 win. “I’m trying to think of when such a shock as this has happened in the World Cup,” one commentator told the BBC. “Pinch me, I’m dreaming,” Bounou said.

The team’s success is no dream. Morocco knew it was an underdog from the beginning. Its David and Goliath-like plan involves a defense-heavy 4-1-4-1 formation that leverages the strength of its star goalkeeper. But every position is crucial and requires utmost dedication to a single goal.

Morocco’s players have shown that dedication, inspiring people throughout the region. Following the team’s victories, Arab children danced in the

streets and fans and players in Qatar were seen waving the Palestinian flag in shows of Arab solidarity. Every winning Arab team made sure that their group picture and public statement included signs and words of solidarity with Palestine.

Perhaps not surprisingly, Bounou, who also plays for Sevilla in Spain’s La Liga, has become something of a role model for Arab youth. Tall and agile, his confidence, humility and sense of community make him stand out in a sport whose stars are more often known for displays of swagger and arrogance. 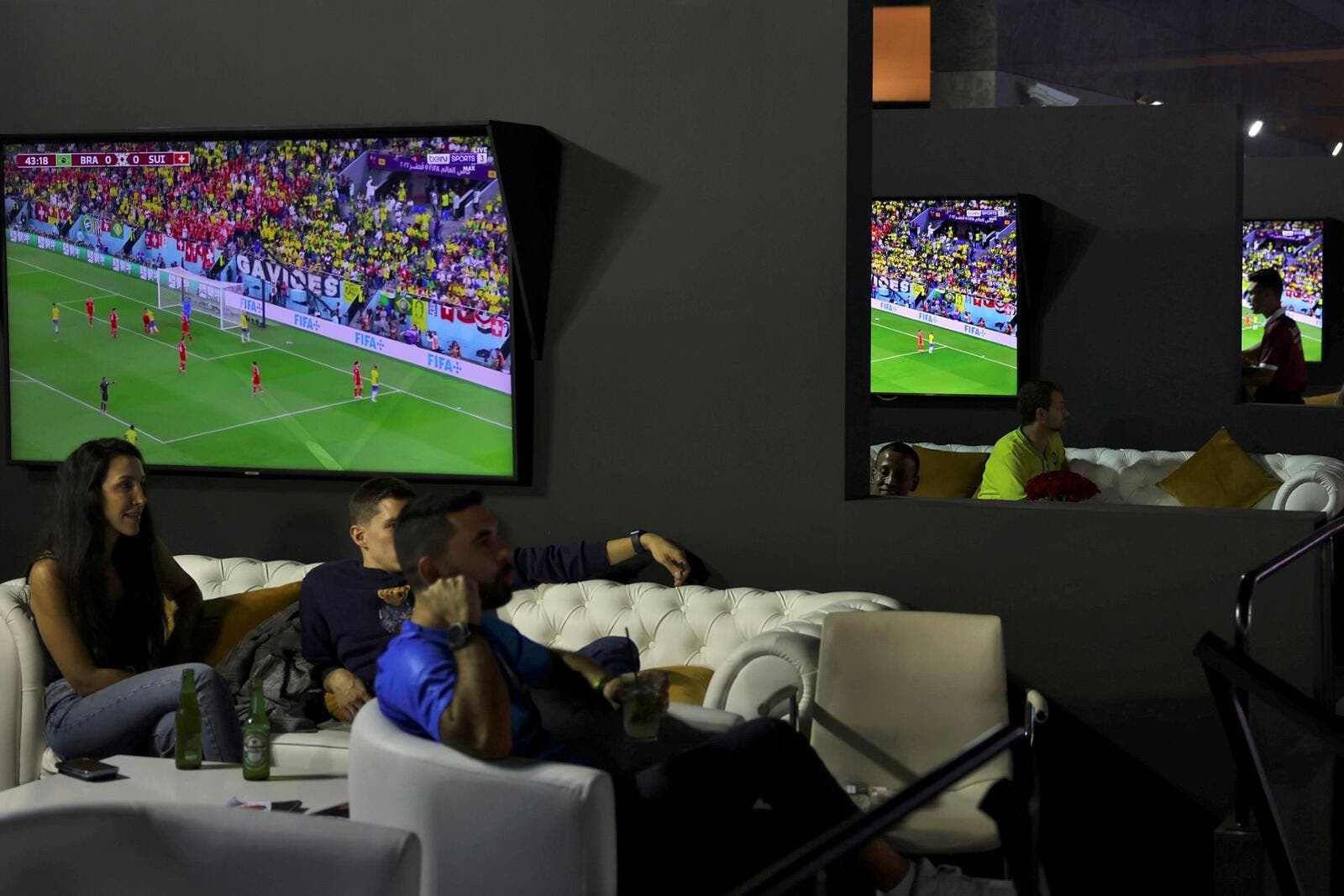 Fans watch a live broadcast of the Qatar 2022 World Cup Group football match between Brazil and Switzerland, near the museum of the Future in Dubai, on November 28, 2022. (Photo by Karim SAHIB / AFP)

The same vices have held back the Arab world more broadly. While basing a team’s strategy on cohesion might seem like a no-brainer, Arab states usually find this hard to achieve — in sport and in life. True, Algeria’s Taoufik Makhloufi won the 1,500-metre run gold at the 2012 London Summer Olympics, Morocco’s Hicham El Guerrouj bagged gold medals for the 1,500-metre and 5,000-metre runs in Athens in 2004 and in 1996, Syria’s Ghada Shouaa won gold at the Atlanta games heptathlon. But all these players won in individual events. When it comes to team sports, Arab countries usually fail miserably.

Similar shortcomings are reflected in business and trade in the region. The Arab League, for example, was created to foster greater unity in the Arab world. But intra-Arab trade still accounts for less than 10 per cent of Arab countries’ imports and exports. Family-based small businesses may thrive, but Arab corporations barely make a dent in global commerce. This seems unlikely to change anytime soon. The World Economic Forum estimates that over 75 per cent of the Arab world’s successful companies are family-owned.

Disunity has serious political consequences as well. The absence of a unified strategy to address famine in Sudan, a country often thought of as the region’s breadbasket, is surely making the situation there worse. Likewise, Palestinians’ internal division when it comes to control of their territories has contributed to their failure to achieve the dignity and freedom they so desperately need. In the last Israeli elections, Arab political parties couldn’t agree on a unified slate of candidates for the Knesset, wasting hundreds of thousands of votes as a result. Even citizens of wealthy Arab countries face hunger and literacy problems.

Arab unity based on well-executed and realistic strategies would make a huge difference to the region. And it is here that Morocco’s World Cup campaign should inspire us. Only by applying more broadly the concepts of selflessness and teamwork that have been central to the team’s success can young Arabs and future politicians, who remain glued to their TV sets as Morocco makes history, translate their shared enthusiasm into real-life unity.