Published March 1st, 2021 - 07:15 GMT
Open interest for ADA came after a Dubai-based office ventured into buying it and also because Cardano hard fork event is approaching. (Shutterstock)
Highlights
A week of all the hot crypto news in one link.

Am I the only one who's happy for the fact that the mainstream media now must use the term Fiat whenever they are comparing Bitcoin to old currencies? 😂

The last week of February was corrective and showed signs of weakness in the demand department. But worry not HODLERS as corrections are healthy signs in the bull market cycle as the prices need a "reset" before mooning to new all-time heights.

On the other side, most crypto traders are not excited about March because it's the month that’s traditionally bearish for the flagship coin. 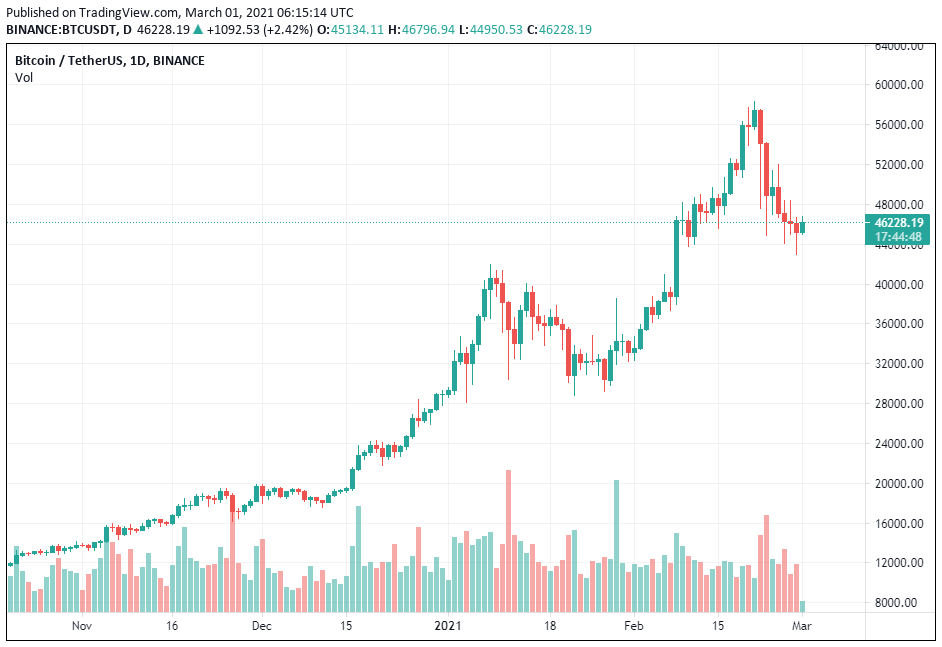 Ethereum (trading at $1,444 at press time) is down 23% since last week as it followed BTCs corrective movement.

On the bright side, Cardano (ADA) had stolen the spotlights as the coin soared almost 21.09% in a week and climbed to third place on the highest cryptocurrency by market cap list.

Open interest for ADA came after a Dubai-based office ventured into buying it and also because Cardano hard fork event is approaching.

Coinbase Gets Ready for Public Listing

Coinbase, a US-based crypto exchange, announced its plan to become directly listed in local stock exchanges back in December last year. This would allow the reading of Coinbases’ shares on any stock market-based in the US.

The filing which Coinbase submitted to SEC revealed that the exchange posted a direct revenue topped $1.1 billion in 2020 and only $482 million in 2019. Also, according to the reports, with all the new heights of cryptocurrencies, Coinbase’s profits might reach a valuation of just over $100 billion, and this would make it the biggest tech IPO in the US ever right after Facebook’s.

Crypto Investments are More Popular than Gold and Silver in Australia

This is one of the findings of a survey conducted in February on behalf of BTC Markets, a Melbourne-based crypto exchange, on 2000 Australian investors. Crypto investments came in second place right after stock shares while gold and silver especially after the pandemic.

According to the survey, Australians prefer to invest heavily in Bitcoin with 83.2% of them holding Bitcoin. Then Ethereum with 42%, followed by Ripple with 28.5%, Litecoin with 18%, and Bitcoin cash with 12%.

Carrefour, Hyperstore owned by UAE-based Majid Al Futtaim, announced a new partnership with IBM to Join IBM’s Food Trust chain, which is a blockchain-enabled global ecosystem for the food industry run on IBM Cloud. This will allow middle east customers to trace exactly where their food comes from farm to dinner table just by scanning a QR code on the selected products.

FD7 Ventures, a global crypto investment fund based in Dubai, announced intentions to sell the majority of the company’s Bitcoin holdings in order to invest in Cardano and Polkadot instead, according to an announcement.

Prakash Chand, Managing Director at FD7 Ventures commented: “Aside from the fact that Bitcoin was first to market and society has given it meaning as a store of value, I think Bitcoin is actually pretty useless. Projects such as Cardano, Polkadot, and Ethereum are the foundation of the new internet and Web 3.0.”

Bitcoin Showered with Love As it Tops Tencent’s Market Cap