Published March 22nd, 2021 - 08:00 GMT
According to Glassnode miners earnings have soared to $54.6 million on March 3, $57.7 million on March 10, and nearly $60 million on March 12 and those revenues were recorded in the peak days of this month alone! (Shutterstock)
Highlights
Here are the market highlights for the week.

This week in the amazing world of crypto it seems that the next undaunted wave of institutional firms interest is focused on mining, even countries are venturing into crypto mining! That’s no surprise as some Bitcoin miners have earned a record of $64 million in one day!

What’s even more thrilling, Brazil has given the green light to Latin America's first bitcoin ETF. And the latest newcomer into NFTs is Binance exchange with a new contest #MyFirstNFT: Win A Limited Edition NFT Featuring Your Artwork! This contest that ends on March 28 invites artists, creators, and crypto creatives to share their best artwork with the theme of “The Tipping Point” using the hashtag #MyFirstNFT.

This is your chance to get your art minted as an NFT by #Binance.https://t.co/dMqplAkMSR

We noticed the term NFT has overtaken #blockchain, #cryptocurrency, and #DeFi in Google search interest.

In fact, it took #NFTs a little over a month to become the hottest thing in the crypto space... (1/4) pic.twitter.com/yzCHrGm7Lm

As crypto derivative products are gaining increasing popularity, the question on many peoples' lips has been:

Time to get back to some of the OG meme roots https://t.co/cWSmNtiKGf pic.twitter.com/B2F03UKhcB

As Bitcoin’s bullish run continues to rock on, miners are gaining record numbers of rewards.

#Bitcoin Miner revenue priced in USD has hit an All Time High of $52.3M per day.

This is despite the BTC issuance dropping post-halving 3 to only ~900BTC/day.

Since the halving, transaction fees have consistently sustained more than 75-100 BTC/day.

According to Glassnode miners earnings have soared to $54.6 million on March 3, $57.7 million on March 10, and nearly $60 million on March 12 and those revenues were recorded in the peak days of this month alone! So it was no surprise to see the shares of bitcoin mining companies like Canaan, Riot Blockchain, Marathon Patent Group, Ebang, Hive and Hut 8 Mining skyrocketing and accelerating to all time new highs. 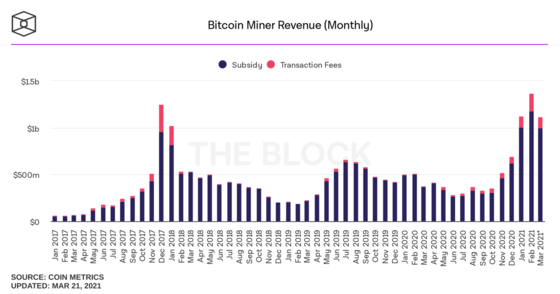 According to Nasdaq here are four crypto mining stocks worth checking out:

According to Cointelegraph analysts "Bitcoin seems to be consolidating its recent gains before starting the next trending move". 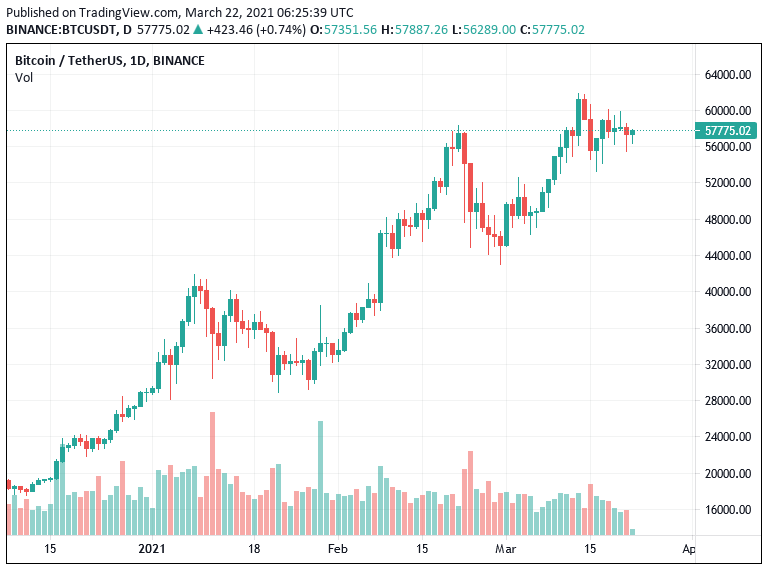 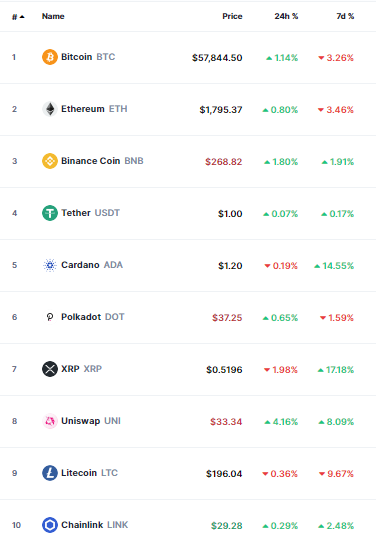 SBI Crypto, a wholly-owned subsidiary of Japanese SBI Holdings, decided to open its bitcoin mining pool for both institutional and individual investors.

SBI has been self-mining bitcoin, bitcoin cash, and bitcoin SV, since August 2017. This pool currently ranks #11 with a mining power of approximately 1.1 EH/s, according to the company’s release.

According to a report by Reuters, Khyber Pakhtunkhwa, a Pakistani province, has decided to build 2 pilot hydroelectric-powered cryptocurrency mining farms.

“People have already been approaching us for investment, and we want them to come to Khyber Pakhtunkhwa, earn some money and have the province earn from that as well,” Zia Ullah Bangash, advisor to the provincial government on science and technology said.

Unlike its rival Nvidia, the American multinational semiconductor company, AMD, said it has no intentions to limit its GPUs’ cryptocurrency-mining capabilities.

Encrypted messaging app Signal announced on twitter that they are now started accepting donations in cryptocurrency.

As a nonprofit organization, we depend on your support. If you've been patiently waiting for Signal to accept cryptocurrency donations, you no longer need to hodl back your generosity.https://t.co/1shZcAbZLi

This newest ETF, dubbed QBTC11, which was launched by QR Asset Management will be listed on the country's main stock exchange B3. Beside QBTC11, there are only 3 bitcoin ETF approved around the world by the Canadian authorities. The US regulatory body SEC has 4 ETF applications pending for review.

Visa Teams up with Crypto.com

Visa, the multinational credit card giant, announced a new partnership with Hong Kong-based Crypto.com to expand payment cards to Australia. Crypto.com, which has acquired a financial service license in Australia, offers cryptocurrency exchange, payments that is now available in 31 countries including the U.S, Canada, Europe and in the Asia-Pacific region.