Published March 8th, 2021 - 07:30 GMT
The world’s first truly digitlized currency (trading $50,776 at press time) has rebounded 8.82% throughout last week. (Shutterstock)
Highlights
Here is a brief recap of all major Bitcoin and cryptocurrency news events of the past week.

The crypto sphere took another leap forward this week with adoption news from Turkey now interested in regulating cryptocurrencies and other large companies are exploring the Blockchain technology; buying all dips and HODLers keeping their holdings of bitcoin. If the term HODLers is new to you, then our glossary 📖can explain it to you along with other terms.

When you own #Bitcoin , everything else get's cheaper over time. Have a low time preference, stack sats and hodl pic.twitter.com/nBhAn8JnGE

March is not traders' favorite month. Every single one of them breathed a sigh of relief when Bitcoin hit $50K again and all the good news throughout the week will keep the bullish momentum in the markets.

The price experienced volatile movements, but the price recovered as soon as Microstrategy purchased around 328 Bitcoins for $15 million:

Things look good for Bitcoin as the flagship coin is still getting unprecedented interest from institutional investors. On the weekly chart below, BTC remains bullish. 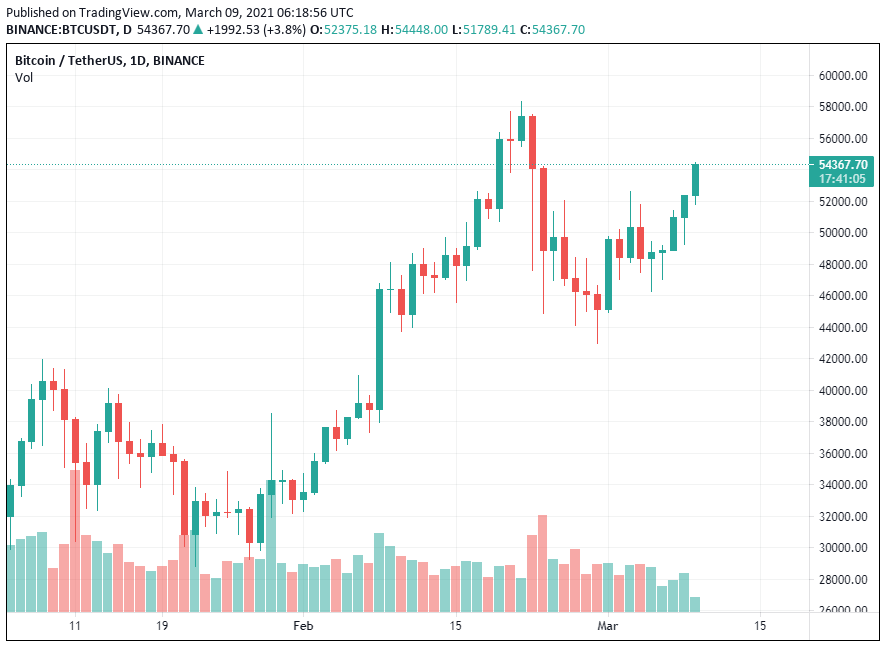 Altcoins charts are also mostly in green in the last 7days as many of them are soaring to new all-time highs. 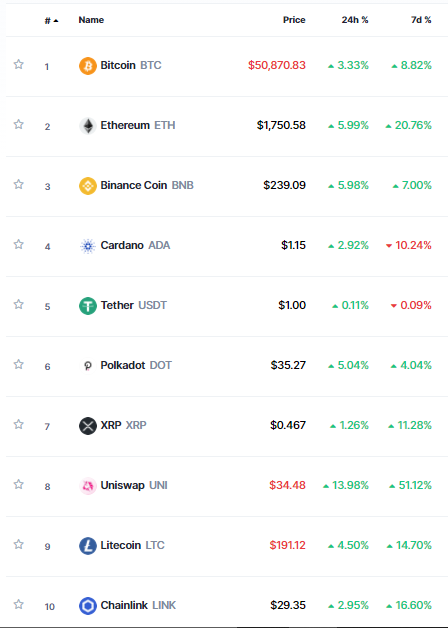 Ethereum (trading at 1,842 at press time) is up 16.82% as bulls are relentlessly trying to overcome the stubborn resistance and pump the world’s second-largest cryptocurrency by market cap above the crucial yet $1,800.

According to the announcement shared by Cointelegraph, the Turkish Ministry of Finance is teaming up with the central bank and other two financial regulatory agencies, however, the ministry has ‘some concerns about crypto and the state of crypto in Turkey’.

As we reported earlier, Turkey has announced its intention to pilot a national central bank digital currency (CBDC) in 2021. Naci Ağbal, chairman of the Central Bank of the Republic of Turkey (CBRT) said: "As the Central Bank, we want to contribute to the creation of a competitive payments ecosystem that can serve as a global model in payment systems, continuously improve its technology in line with the requirements of the day”.

Antivirus Software Pioneer and Crypto advocate, John McAfee, has been found guilty of a “pump and dump” scheme of crypto assets and money laundering conspiracy crimes, based on a news release from the United States Department of Justice.

The 75-year-old McAfee, who was wanted for tax evasion, is now imprisoned in Spain where he was arrested by authorities in Barcelona last October as he was going to escape to Istanbul.

German automaker Volkswagen announced its plans to pilot and experiment with blockchain technology in a bid to get rid of gas-powered vehicles and ensure an ‘efficient future for Volkswagen’s electric vehicles’.

To achieve all of this, Volkswagen is teaming up with Blockchain alliance Energy Web. The goal of the partnership is to explore ways to ‘use EV batteries to store surplus renewable energy, which can then be released into the main grid when energy demand exceeds supply’. “With this partnership, we want to accelerate electric mobility and deliver even more value to EV customers,” explained Jesse Morris, a chief commercial officer of Energy Web.

Bitcoin Showered with Love As it Tops Tencent’s Market Cap

Manchester City Priced Out of Move for Mbappe