March has been an interesting month for the crypto world as NFT markets re-emerged strongly, institutional and governmental adoption ruled the scene and mining revenues skyrocketed. Although traders usually don’t like March, this year Bitcoin closed its best at March and the coin's candles have been radiating green for six whole months for the first time since 2013 🙆.

Summer is around the corner and you know what’s better than being eco-friendly is earning beer while you’re at it. This Aussie Brewery allows you to trade your excess solar energy for a pint of beer!

What’s more awesome is that all of this is made possible by blockchain. Environment-friendly and rewarding big cold beer, is it knock off time yet? where can I sign up?

on the NFT front, Canadian singer dubbed as The Weeknd, announced the release of his first nonfungible token via Nifty Gateway on Saturday.

Excited to announce that my first NFT drop is taking place on Saturday at 2:00 pm EST on @niftygateway. The collection will feature new music and limited edition art. I developed the artwork with Strange Loop Studios pic.twitter.com/627BO4JekK

Artists, painters, musicians, sports figures and even journalists are venturing into the NFT market. This really begs a bunch of questions as a lot of people wonder if this mania will be just a fizzy chapter of crypto hype or will it truly change the way we perceive digital art? I guess we'll wait and see, maybe this article will be sold as an NFT someday 😂.

Without further ado, let’s take a look at the major highlights of last week.

According to Cointelegraph, the CEO of the Bitcoin exchange CoinCorner, Danny Scott, revealed that Bitcoin might rally to $83,000 if it emulates its average April return of 51% as it had over the past 10 years. 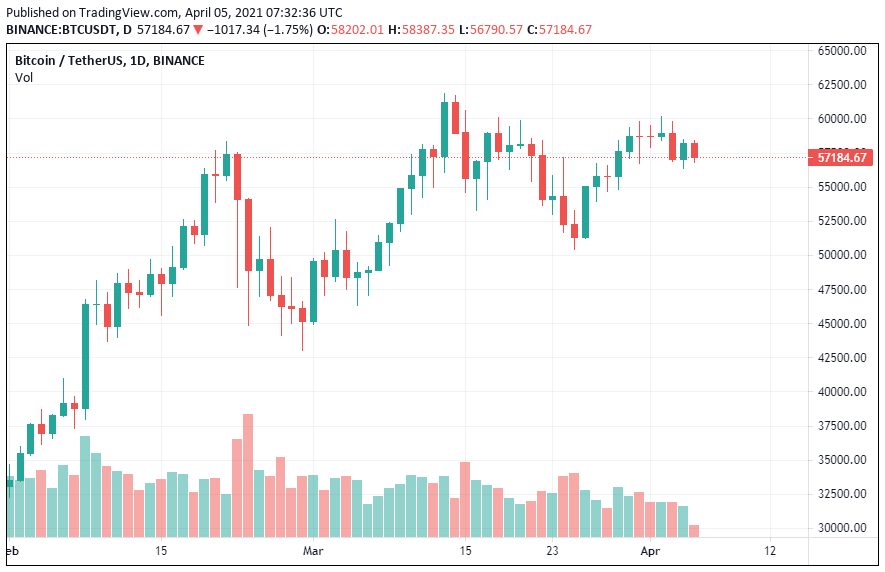 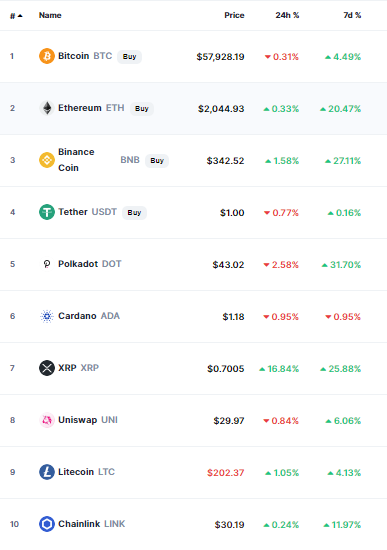 Big News: PayPal Allows US Customers to Pay in Bitcoin at Global Merchants

Today, we are announcing the launch of Checkout with Crypto, a new way for PayPal customers to check out with #Cryptocurrency to pay for select online purchases. https://t.co/RbOe8aLtlz pic.twitter.com/zGWHgbwVlU

According to the announcement, users will be able to use this new feature called ‘check out with crypto’ to pay safely and easily, quickly converting Cryptocurrency holdings  to US dollars at checkout, with clear conversion rates and no additional fees.

With this new feature, cryptocurrency now is another countable way for US-based customers to pay and global businesses to get paid, adding enhanced utility for cryptocurrency holders, the announcement reads.

Shortly after the partnership with Crypto.com, the multinational credit card giant, Visa, announced plans to offer the USDC settlement capability to additional partners later this year.

Today, @Visa announced a major industry first: the use of USD Coin (USDC) to settle a transaction with Visa over the @Ethereum public #blockchain: https://t.co/QiCuOGns77 pic.twitter.com/GVVGrzuBgo

USDC is a stablecoin backed by the US dollar, Visa plans to settle the transaction over Ethereum blockchain with the help of Anchorage, the first federally chartered digital asset bank and an exclusive Visa digital currency settlement partner, and Crypto.com.

Visa has now issued more than 2 billion tokens worldwide through Visa Token Service! 🎉 Learn more about VTS and what's next for the future of tokens: https://t.co/J5pf0JRDCK pic.twitter.com/YyPQf0oWyF

In an interview with Bloomberg,  European Central Bank President, Christine Lagarde, revealed that the rollout of Digital Euro could take up to four years. By mid-2021, the ECB’s Governing Council will release a decision whether the institution will begin experimenting with a CBDC or not.

Earlier this year, Lagarde emphasized that the new digital currency will not replace cash, but will complement it: “The Euro belongs to Europeans and we are its guardian. We should be prepared to issue a digital euro, should the need arise.”

Victoria Bitter, a lager beer produced by Carlton & United Breweries, a subsidiary of Asahi, in Melbourne, Victoria, has announced a new program that allows Aussie beer lovers to trade and exchange their excess solar energy for slabs of Victoria Bitter.

This awesome project named ‘Solar Exchange’ was made possible with the partnership of 5-star rated1energy retailer Diamond Energy, and Power Ledger, a blockchain-powered software platform that enables energy trading.

According to the announcement, Every $30 worth of credit can be exchanged for a slab of beer that will be delivered to your doorstep.

Tesla Offers Bitcoin As Payment Option, NFT Mania Might be Getting out of Hand
Bitcoin Mining Revenues Hit New All-Time-High