Crypto News Recap: Tesla Offers Bitcoin As Payment Option, NFT Mania Might be Getting out of Hand

Published March 29th, 2021 - 07:00 GMT
The Technoking of Tesla announced on Twitter that fractions of bitcoin can be used to buy Tesla’s cars. (Shutterstock)
Highlights
Can't understand price charts📈? You know the drill... We've got you covered💃! Here is a brief recap of all major Bitcoin and cryptocurrency news events of the past week.

This week in the crypto world the NFT mania seems to be getting a bit out of hand as everyone, including journalists, wants to join the NFT party because why NOT.  Also, The one and only Techno King of Tesla made a hotly anticipated announcement after teasing us a couple of months ago when the biggest EV company revealed investing $1.5 billion in the world’s first truly digital currency.

Still not sure what an NFT is? Check out our crypto glossary 📖.

Ready? Let's talk crypto, cars, NFTs, and charts 📈, shall we?

Bitcoin (trading $55,398 at press time) is undergoing a corrective movement and slumped 3.87% throughout the week despite all the good adoption news from Tesla. 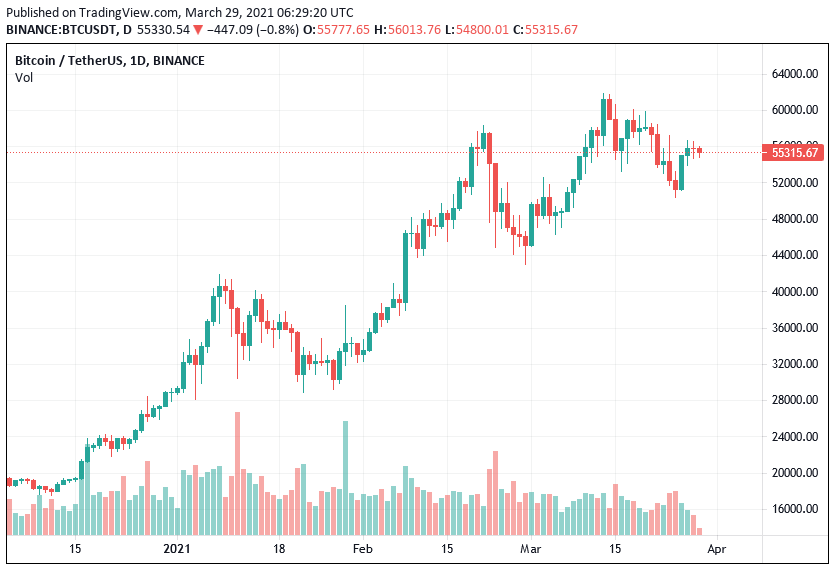 According to Cointelegraph, YouTuber and derivatives trader Tone Vays also believes the best is yet to come, saying: “While it is still possible for Bitcoin to make a lower low for the month in the $48,000 range, I believe we will go up to above $70,000 before June.” 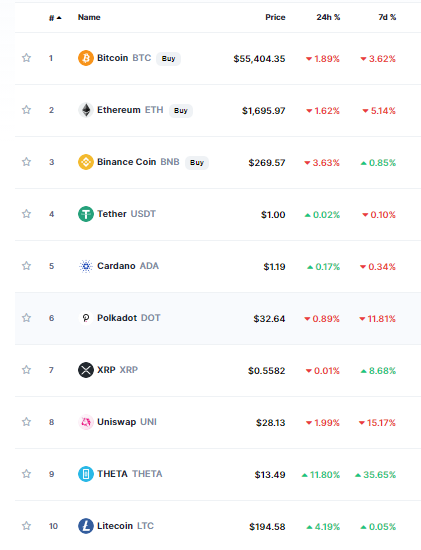 Last Wednesday, The Technoking of Tesla announced on Twitter that fractions of bitcoin can be used to buy Tesla’s cars.

You can now buy a Tesla with Bitcoin

In a series of following replies, Musk added that "Tesla is using only internal & open source software & operates Bitcoin nodes directly,". Also, he noted that "Bitcoin paid to Tesla will be retained as Bitcoin, not converted to fiat currency."

However, For the time being, only US-based customers will be able to pay for Tesla vehicles with bitcoin. But don’t worry dear readers, Musk tweeted this payment option to be available worldwide later this year.

You can buy a Tesla with #Bitcoin. Yes, Elon Musk is letting you buy depreciating assets with Bitcoin—with no intention to convert it back to fiat.

He's already made $1B in profit from Tesla's initial $1.5B investment two months ago.

Crypto advocate and Twitter CEO Jack Dorsey has sold a NFT of the first-ever tweet for $2.9 million to an investor dubbed as @sinaEstavi.

Will immediately convert proceeds to #Bitcoin

And send to @GiveDirectly Africa Response

The New York Times is Offering articles as NFTs!

Who said that journalists can’t participate in NFTs mania? NYT has entered the game and even sold an article for more than half a million dollars!

The NYT made a NFT!

My new column is about NFTs, and I also turned the column into a NFT and put it up for auction on @withFND, with proceeds going to charity.

Bid away, and you could own the first NFT in the paper's 170-year history. https://t.co/9ItGZvID8B

Kevin Roose decided to turn a column about NFTs that is  into an NFT and put it up for auction. That’s not everything, also NYT sweetened the deal with a dedicated follow-up article that will include a congratulatory voice memo from the host of The Daily podcast, alongside mentioning buyer’s name, your affiliation and a family-friendly image of their choice.

Finally, Kentucky governor, Andy Beshear, approved the 2 proposed bills a week after the states' legislature suggested them. These bills aim to attract crypto mining companies to the state by introducing energy and tax breaks mining operations.