The UN: The World Has a Collective Responsibility to End Syrian War

The war in Syria is not only Syria’s war,” UN Secretary-General Antonio Guterres said on Tuesday. “Ending it, and the tremendous suffering it continues to cause, is a collective responsibility. Today, we must all commit fully to achieving that goal.”

He again called for a political resolution to the conflict and reiterated that there can be no military solution. He added that the country is in a kind of limbo as “the situation continues to drift toward one of no war, no peace.”

The war in Syria is not only Syria’s war.

Ending it, and the tremendous suffering it continues to cause, is a collective responsibility.

We must all commit fully to achieving a solution that meets the legitimate aspirations of all Syrians. https://t.co/OBvxizXTkE pic.twitter.com/McgZE6vmCD

Guterres was speaking during an informal plenary session of the General Assembly convened by its president, Volkan Bozkir, so that the secretary-general could brief members on the latest developments in the country. These included progress on the implementation of Resolution 2254, which was adopted in December 2015 and calls for a ceasefire and political settlement; the humanitarian crisis; and the human rights situation.

“Credible progress” in the work of the Syrian Constitutional Committee is, Guterres said, a critical step toward the implementation of Resolution 22454. This calls for the drafting of a new constitution that will pave the way for free and fair elections, under the auspices of the UN, in which all Syrians, including the diaspora, will have the right to vote.

“The results of the committee’s work so far have fallen short of my expectations. More importantly, they have fallen short of the Syrian people’s expectations,” he added. He echoed a call by Geir Pedersen, the UN’s special envoy for Syria, for the upcoming sixth session of the committee to establish clear goals, credible working methods and enhanced cooperation between its two co-chairs. This could be a foundation on which to build trust, Guterres said, as he again stressed that the fate of the Syrians is not “solely in their hands” given that several foreign armed forces are active in the country. 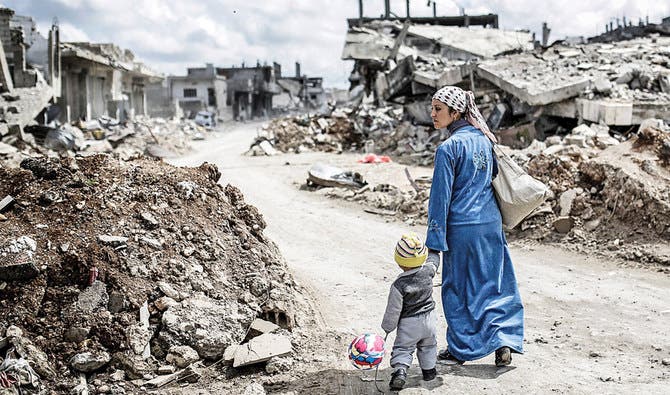 Despite 12 months of “relative calm” following the Astana ceasefire agreement in March 2020, he said “it was still a treacherous year: airstrikes, exchanges of artillery and small-arms fire continued.”

Recent serious challenges to the “trends toward relative calm” included a number of incidents on March 21: an attack on a UN-supported hospital in Atarib, Aleppo; aerial strikes near the Bab Al-Hawa border crossing through which UN humanitarian aid shipments arrive in Syria from Turkey; and the shelling of residential neighborhoods in Aleppo.

March 15 marked the 10th anniversary of the start of the war in Syria, which was sparked by a brutal crackdown by Assad regime forces on peaceful demonstrators demanding reforms. Since then, Syrians have endured “some of the gravest crimes the world has witnessed this century,” Guterres said.

“The massive violations of human rights and international humanitarian law in Syria over the past decade shock the conscience,” he added, as he denounced the impunity with which the perpetrators of these crimes have been allowed to act.

The ongoing effects of the war have been compounded by the COVID-19 pandemic, which is expected to continue to affect the country for the rest of this year. Guterres said that plans are under way to send vaccines to the country, with the first shipment, with enough doses for 3 percent of the population, already dispatched.

He called on member states to show “generous support” by donating the $10 billion required to provide humanitarian for more than 12 million people in need across Syria and about 6 million refugees in neighboring countries.

In his former role as high commissioner for refugees, Guterres said he not only witnessed the “dramatic suffering” of Syrian refugees but was also inspired by the “enormous generosity and solidarity” of the Syrian people in years gone by when they welcomed millions refugees from Iraq and Palestine who sought refuge in their country.

The secretary-general also called for the world to pay “urgent attention” to the “tens of thousands of Syrians who have been arbitrarily deprived of their liberty” in Syria. They include detainees, abductees and those who have been forcibly disappeared.

“Men and women detainees, including boys as young as 11, have been subjected to a range of sexual violence, including rape and sexual torture, including genital mutilation,” Guterres said, as he called for human rights and humanitarian organizations to be granted access to all detention centers.

“After a decade of war, many Syrians have lost confidence that the international community can help them forge an agreed path out of the conflict,” he said. But he vowed to continue relentlessly to pursue a political settlement to the conflict that creates the necessary conditions for the safe and voluntary return of refugees.