The dramatic fall of Afghanistan to the Taliban will go down in history as the most spectacular military and political debacle for the United States in decades. Even as it withdrew its forces from the country it had occupied for the last 20 years, the US had mishandled and miscalculated as it had done for years. 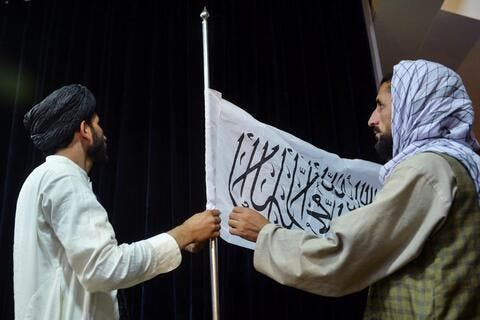 It took the well-equipped South Vietnamese army two years to finally give in after the humiliating US withdrawal from Vietnam, but for the 300,000 strong American trained Afghan army the collapse took less than a month. On Sunday, the Taliban entered Kabul without a fight. By the evening, they were celebrating at the presidential palace and vowing to declare Afghanistan as an Islamic emirate.

The war in Afghanistan was not only a human tragedy and political disaster, but it was also a massive transfer of wealth from the American people to wealthy defense contractors.

President Ashraf Ghani and top officials had fled the country. Millions of Afghans were left abandoned by the US and its western allies.

The shift in the Afghanistan War’s dynamics in recent months — American troops leaving, the Taliban surging toward the capital as the government struggles to hold them back — has altered many Afghans’ proximity to the war. https://t.co/SUkTPBvYiW

And there were “Saigon moments” on that ominous day: US helicopters hovering over the deserted embassy building to evacuate staff, while thousands of “friendly” Afghan collaborators; translators, aides and helpers, and their families scurried to board planes making their final departure from the abandoned city. Amid the pandemonium most will be left to their fate.

Think about how crazy this:

Afghanistan was seized by terrorists. Americans and allies left behind.

Biden did NOT make ONE call to a foreign leader.

Biden did NOT make ONE public appearance for 6 days.

Biden did NOT take questions.

All this, while Afghanistan crumbled!

For the Joe Biden administration, there is no clear strategy of what to do next. Like his predecessor, Donald Trump, Biden wanted to end this endless war. But relying on the Afghan army to repulse advancing Taliban fighters, even for a few months, proved to be a big intelligence miscalculation.

American political science think tanks want to portray US fiasco in Afghanistan as NATO fiasco not American. Reminds me of Soviet argument of invasion of Czechoslovakia as a Warsaw Pact operation not Soviet one. US Pentagon, West Point gurus plagiated Soviet fiasco in Afghanistan pic.twitter.com/QJdMVwXgpR

After 20 years and hundreds of billions of dollars spent and tens of thousands of lives lost, the US was out, defeated, with little strategic objectives achieved. Even though Biden had said that the US was not there for nation building, the reality is that successive administrations had hoped that a western style democracy in Afghanistan would be the only assurance that the Taliban and other jihadist groups will not return to power.

Incredible to read American political think tanks trying to present American fiasco and humiliating defeat as a US strategy to defeat China and as future failure of China in Afghanistan. They try to portray it as a Chinese defeat. Takes a lot of mind twisting to achieve it. pic.twitter.com/OuoOlBNxUQ

Like in Iraq, the US had failed to understand the complexities of Afghan society and culture. It had failed to appreciate the role neighbouring countries, like Pakistan, had played to provide safe haven for the retreating Taliban in the wake of the 2001 NATO invasion. And just like the defunct Soviet Union, it had failed to draw the lessons of history. Afghanistan had become the fulcrum of a geopolitical power struggle that even the sole superpower of the day could not untangle.

"Climate change, political polarization, economic crisis, the crumbling of the American empire, and simmering social unrest all stand before us as not individual phenomena, but as a single challenge comprised of interconnected disasters." https://t.co/eCgWMLc4f9

The vacuum left by the US withdrawal will be filled by Afghanistan’s close and distant neighbours. That’s the way it works. Russia and China will step in at one point or another. The Taliban need recognition if they want to survive. It is not clear how they will govern a country that has been at war for most of the last four decades with deep sectarian, tribal and ethnic fissures.

President Biden’s shameful decision to retreat from Afghanistan is a precipitous failure of American leadership and a stain on our reputation. The United States had the capacity to avoid this disaster. pic.twitter.com/azAdQAWclO

Will they share power with local rivals or will they revert to the authoritarian, autocratic and puritanical rule of the past; when they were in power. And what about Al Qaeda and other terrorist groups re-emerging and regrouping under Taliban protection? What does that mean for the west and the region? What about the fledgling democracy, women rights, human rights and freedom of expression? The prognosis is not good and the future of the country looks bleak.

And then there is the ideological backlash at home; in the United States. The fall of Kabul presents a symbolic end to almost two decades of neoconservative view of the world and of the role of the US that was enshrined into a foreign policy mantra under George W. Bush Jr. The interventionist ideology that neoconservative icons had pushed under Bush had finally come to an end. The US is exhausted and the Middle East has become a geopolitical nuisance, a liability, rather than a peaceful sphere of American influence.

And so Bush’s Folly comes to its inevitable end. A military, political, and economic disaster fueled by worship of the American military-industrial complex. We knew from the very beginning that this would be the likely result. https://t.co/vQeXLpLJ06

Would the Afghan debacle signal a slow embrace of selective isolationism for Washington? It could speed up the pivot to a more stable southeast Asia, to a more strategically vital region like South and Central America and to a more comfortable and equitable relationship with the EU.

From @WSJOpinion: Weakness arouses evil, and the magnitude of evil now rising in Afghanistan speaks volumes about the weaknesses of President Biden, writes Mike Pence https://t.co/xoT1XgbdKH

The American abandonment of Afghanistan sends a troubling message to US regional allies with their conflicting agendas and more importantly to its traditional rivals; Iran, Turkey and Russia. Without direct US regional involvement America’s allies should feel concerned.

Analysis: Taliban Seated in Kabul. What Can The US Do?

Said the man who helped create the political and humanitarian disaster we are all witnessing in Afghanistan! He stood by, like the feckless Secretary of State he was, allowing Frump and Jared to hand all control over the U.S. withdrawal to the Taliban!https://t.co/3E8eUX4kol

One thing is for sure and that is the reverberations of America’s departure from Afghanistan would be felt for years in a region that remains volatile and unsettling, but remains equally important to its immediate neighbours like Europe and Russia as it battles extreme religious dogma, sectarian and ethnic divisions and a desperate search for democracy and egalitarianism.