Who is the Winner of the Iranian Presidential Elections?

Published June 19th, 2021 - 06:19 GMT
A girl looks on as a woman registers to vote at a polling station polling station in Iran's capital Tehran on June 18, 2021, during the 2021 presidential election. Iranians voted on June 18 in a presidential election in which ultraconservative cleric Ebrahim Raisi is seen as all but certain to coast to victory after all serious rivals were barred from running. ATTA KENARE / AFP
Highlights
He also congratulated the Leader of the Islamic Revolution for people’s “epic" participation in the presidential polls.

Rezaei, Hemmati, and Amir Hossein Qazizadeh Hashemi were competing with Raeisi in the presidential elections.

Rezaei also congratulated the Leader of the Islamic Revolution Ayatollah Ali Khamenei for people’s participation in the elections.

Also in part of his congratulatory message , Hemmati on his Instagram page hoped that Raeisi would bring prosperity and better livelihood for the "great Iranian nation".

In his message, Qazizadeh also said congratulated Raeisi. “While supporting the votes of the people, I congratulate Hazrat Ayatollah Seyyed Ebrahim Raeisi as the people’s” elected president, Qazizadeh stated.

Qazizadeh also wished success for Raeisi for being granted the honor by the electorate to serve the “great Iranian nation.”

He also congratulated the Leader of the Islamic Revolution for people’s “epic" participation in the presidential polls.

Elsewhere in his remarks, Qazizadeh said Ayatollah Khamenei “made the path clear to all through his guiding remarks on the eve of the elections.”

However, the Interior Ministry has not yet released any report about the number of votes that each candidate has collected. 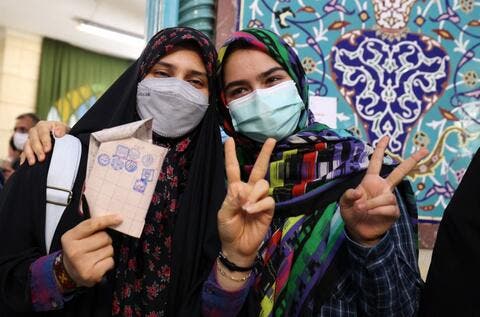 Also on Saturday morning, Parliament speaker Mohammad Baqer Qalibaf praised the people's massive participation in the elections despite complaints about incompetency in managing the country.

In a post on his Twitter account,  Qalibaf said he congratulates the holding of "national election celebrations as well as epic participation" of the people to the Leader of the Islamic Revolution and the "noble people of Iran."