Published April 26th, 2021 - 06:18 GMT
A struggle for freedom. Palestinians take part in a demonstration in support of Palestinian prisoners held in Israeli jails, on April 17. (AFP)
Highlights
In Palestine, over 4,500 people are held in Israeli custody with approximately 1,400 arrested this year alone.

The animating logic behind Israel’s punitive carceral system is to weaken Palestinian morale and their ability to organise through unjust imprisonment and disproportionate sentences.

Israeli oppression and imprisonment of Palestinians and their supporters has frequently garnered international attention, but little international action. 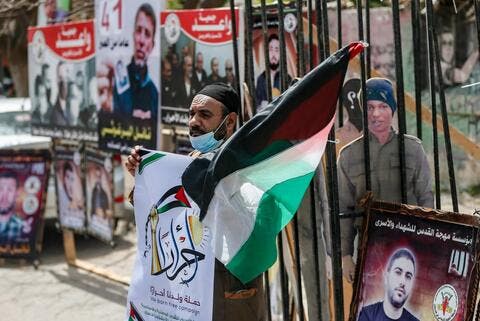 How is Hamas Going to Free Palestinian Prisoners in Israeli Jails?

However recent geopolitical shifts and a series of high profile cases reported through large media outlets highlight the extent to which unjust imprisonment and disproportionate sentencing and prison durations affect the Palestinian right to self-determination.

1000s of Palestinian prisoners are in Israeli jails, including children, subjected to cruel policy

This even extends past the physical and legal jurisdiction of Israel, affecting supporters of Palestine and thus offering the potential of a more unified call to action. Collective punishment, now extending past Palestinians, should raise questions of the reach of the illegal occupation and how it is growing as both a regional and international problem.

Internationally, the case of the Palestinian resistance fighter and Lebanese citizen Georges Ibrahim Abdallah in France has brought together number of sides of the social and political spectrum, and allows for a re-centring of the discussion of anti-Zionism.

Freedom to all #Palestinian prisoners in Israeli occupation jails!#PalestinianPrisonersDay pic.twitter.com/vFY7vwNv01

Abdallah is one of the longest serving political prisoners in history - specifically in Europe - with last October marking 37 years behind bars. Convicted for the assasination of an American and an Israeli diplomat, Abdallah was sentenced to life in prison but has served the minimum sentence and consistently denied release due to foreign pressure.

A protest calling for his release organised by Collectif Palestine Vaincra recently took place in Toulouse, raising awareness on the plight of a number of high profile political prisoners directly or indirectly detained by Israel such as Khalida Jarrar, Marwan Barghouti and Ahmad Saadat.

Despite being granted release with a stipulation of deportation to Lebanon, the then-foreign minister denied his exit from France and Abdallah continued his appeal process. While France and Lebanon remain strong allies, it seems to be an alliance of French interests. It has and continues to set a premise for societies to fall in line with national interests rather than independently forming an opinion based on historical fact.

On Palestinian Prisoner Day, hundreds of Palestinians remain unjustly imprisoned and under Israeli administrative detention, with no access to legal support or the outside world. This purposeful system is often used to break the spirit & dignity of Palestinian resistance. pic.twitter.com/E6TOGxn9An

In tandem, Prisoners Day was recently commemorated on April 17 with a week-long campaign that is set to raise awareness and the plight of those in Israeli prisons or detention centres. In Palestine, over 4,500 people are held in Israeli custody with approximately 1,400 arrested this year alone. This comes in conjunction with a general escalation of aggression against Palestinians in both Gaza, the West Bank and Jerusalem.

Sentencing is often disproportionate to the ‘crime’ committed and usually has lifelong detrimental effects on the prisoner years after his release. Oftentimes, the effect of mistreatment and poor care cause ex-prisoners to become traumatised, in essence subjecting many to life sentences.

Palestinian Prisoners Day is marked by rising allegations of torture and cruel, degrading and inhuman treatment of Palestinian prisoners and detainees, coupled with a sharp increase in Israel’s use of administrative detention.#PalestinianPrisonersDay 🇵🇸#IsraeliCrimes pic.twitter.com/ClPjYKeZYi

A recent case to highlight this is that of Mansour al Shahatit, who, upon his release from Israeli custody on April 8, was unable to recognise his mother or brother due to an extended sentence of seventeen years, in addition to experiencing both solitary confinement and torture.

The suffering he endured at the hands of Israeli forces has left a deep imprint on his psyche and essentially, once again, serves to set a precedent against Palestinian resistence. His mother, Fayza al Shatit, said, “Mansour’s condition was much better at the time of his arrest, and I hold the Israeli occupation fully responsible for the health and mental deterioration. Mansour was punished twice – sentenced to 17 years in prison and the loss of his future because of his mental and psychological deterioration.”

This past Tuesday in Ofer prison, one of three prisons inside the West Bank that is run by Israeli forces, a second raid was conducted this month, including both a drill operation and a general inspection, on prisoners using special force units. Ofer prison houses a number of political prisoners, including members of Hamas.

Facilities such as this provide another dimension to the imprisonment of the Palestinian cause. Hamas’ leaders are housed in Ofer and are often condemned to solitary confinement throughout elections, as an attempt to stop them from properly participating in campaigns.

This tactic is seen today more prominently through the imprisonment of Marwan Barghouti, a leader of the Fatah Party and central figure in the second intifada, running for the Presidential seat of the Palestinian Authority despite being held in Israeli custody.

Serving five consecutive life sentences, Barghouti continues to campaign and remains active in the political sphere. Khalida Jarrar, another promising politician from the Popular Front for the Liberation of Palestine and the Palestinian Legislative Council, is also subjected to frequent detention and subsequent arrests. Despite this she continues to work on issues from her captivity as well as with women in the prisons where she is held.

Despite #Covid19 pandemic, Palestinian prisoners have not been provided with hygiene and sanitation products, and have been further restricted from making purchases from the prison canteen.#PalestinianPrisonersDay pic.twitter.com/Q6BCkfu0UW

International pressure, disproportionate and cruel treatment and local electoral sabotage are certainly only a part of the prison machine. Under the occupation, adults and children are frequently held under administrative detention for extended periods of time. Israeli officials are able to hold an individual without charges for up to six months with the possibility (and high likelihood) of it being renewed upon expiration.

Israel’s detention of Palestinian political prisoners has always been unjust and illegal. Now #COVID19 poses an unprecedented threat to their lives. They must be released from apartheid Israel’s jails.#BDS campaigns aim to pressure Israel to respect Palestinians’ basic rights. pic.twitter.com/yfNdD7ZSDu

Just this past week arrests were made in Hebron and Jerusalem, targeting Palestinians despite a violent right-wing Israeli prompt that included chants reciting, “Death to Arabs!” en-masse. Over 100 people were injured by Israeli forces, 22 of whom sustained severe injuries.

While the nature of this particular prison system is interlinked and includes strategic arrests to weaken both the morale and ability to organise amongst the Palestinian population, the fact that this is now finally becoming apparent in an undeniable manner may influence a much needed call for solidarity. 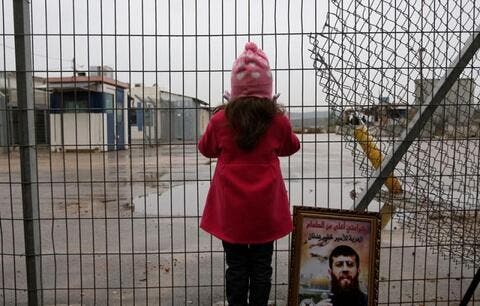 More than 6,500 Palestinians in Israeli prisons

Ultimately, this affects not only Palestinians, but also people from the Arab world. It also calls into concern a number of states' geopolitical alliances and provokes the question: Why do so-called democracies encourage undemocratic violence against a near-crippled population?

Nadine Sayegh is a multidisciplinary writer and researcher covering the Arab world. She has covered topics including gender in the region, countering violent extremism, the Occupied Palestinian Territories, amongst other social and political issues.